Q&A: Should parents expose a trilingual-to-be baby to all languages from the start? 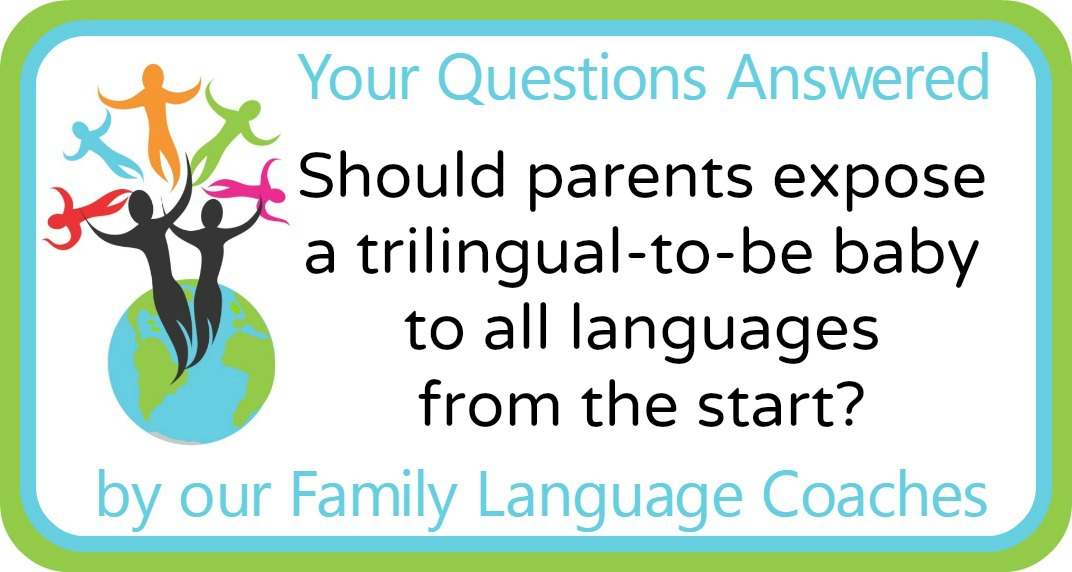 My husband and I are expecting our first child, a boy, in June. My husband is Scottish, I am German and we live in rural Japan working at an international university. We only moved here last year and cannot really speak Japanese, although we have started to learn it (I speak a tiny bit, my husband basically nothing). We speak in English together, and our social circle is recruited from the university where everyone speaks English.

I am actually half-Japanese but grew up in Germany and my parents did not raise me bilingually, something that I always regretted. So I am very happy to think of my boy as learning all three languages. Plan is that my husband will speak English to him, me German, and my husband and me will speak in English. My husband speaks neither German nor Japanese. The surroundings will be entirely Japanese. I am a bit concerned for two reasons.

First, none of us can speak the language he will be immersed in in his social context. We were considering to have a nanny for a few afternoons a week from three months onwards, but if me and my husband already speak different languages to him and the nanny then immediately a third, will that be too much at such early age? Unfortunately, where we live there are literally zero non-Japanese care/nursery/school options we can choose from.

Second, will it be possible for my son to learn German? Is the one-parent-one language enough if he has no other exposure at all? Even when we go back to Europe, we do not really spend much time around German speakers since we speak English with all our common friends and I usually only go and see old friends/mother and brother for xmas.

I was just wondering what you make of this. Should we at least wait with the Japanese exposure until he goes to the nursery (10 months or maybe one year)? Any good advice about German? I know the best thing would be for us to learn fluent Japanese asap and for my husband to learn German as well, but let’s be realistic, we have very demanding academic jobs and that won’t happen in any near future (although of course we try as best as we can with Japanese at least).

I am really not sure how to go about this, so any advice would be great.

Congratulations on your soon-to-be occasion of becoming a family of three with the addition of your baby son! Thank you for your question on how to best raise him to be trilingual in your family languages: German, English and Japanese.

I would like to reassure you that there are many children growing up with three languages, and that they can cope just fine. Your little one will do so, too! You have the benefit of having a clear structure with the languages: German from you, English from your husband and as a home language, as well as Japanese from the environment and possibly from a nanny and later nursery and school.

You are right about having to be realistic and not counting on neither your husband learning German nor either of you quickly reaching a level of fluency in Japanese which would make you feel comfortable to speak the language with your son. Moreover, this is also not necessary for your son to become trilingual – both of you sticking to your languages is much more important for his language learning.

Your first concern is about when your son will learn Japanese and that neither you or your husband (yet) know the language. It will not be too much for your baby son to hear three different languages, so please do not let this concern stop you from hiring a Japanese-speaking nanny for your son. On the contrary, it could be beneficial for your son to get used to Japanese in anticipation of starting nursery where he will be immersed in the language.

On the other hand, should you decide to wait with the Japanese exposure, this will also be okay. Children do pick up a language at an amazing pace when fully immersed in it. What you might want to do is to visit the potential nurseries in advance and discuss the situation with them – find the one that is most open to bilingual children. Ask what their expectations are when it comes to language skills and how they can support your son. As I understand it, there can be big differences in the attitudes to multilingualism between different educational institutions in Japan.

With regards to you and your husband not speaking Japanese yet, keep in mind that you do still have quite a few years before there will be an active need for you to support your son with homework or the like. Also, should there come a time when you feel that your Japanese-skills are not enough to support him, you can always find a tutor to assist both you and your son.

Secondly you question whether it will be enough for your son to learn German as you will be the main and only source of German for him. In many (if not most) OPOL families one parent is in a very similar situation to yours. Based on experience, these parents would tell you that it works, but that it does require commitment and determination from you.

Get used to talking with your son – a lot! Keep a running commentary on what you are doing when you are with him – be it when bathing or feeding him, take him to the park or doing chores. You might feel a bit self-conscious about it to start with (it might feel like you are talking to yourself), but remember why you are doing it! Prepare yourself by ensuring you have access to German books, toys and later media that can help you with the German exposure. I would also try to arrange on-line calls with German-speaking family and friends to have regular contact with others who talk the language. It will be a while before your son can actively participates in the calls, but it is good to get into a routine!