Q&A: Which sign language to teach a child with Down syndrome in a bilingual family? 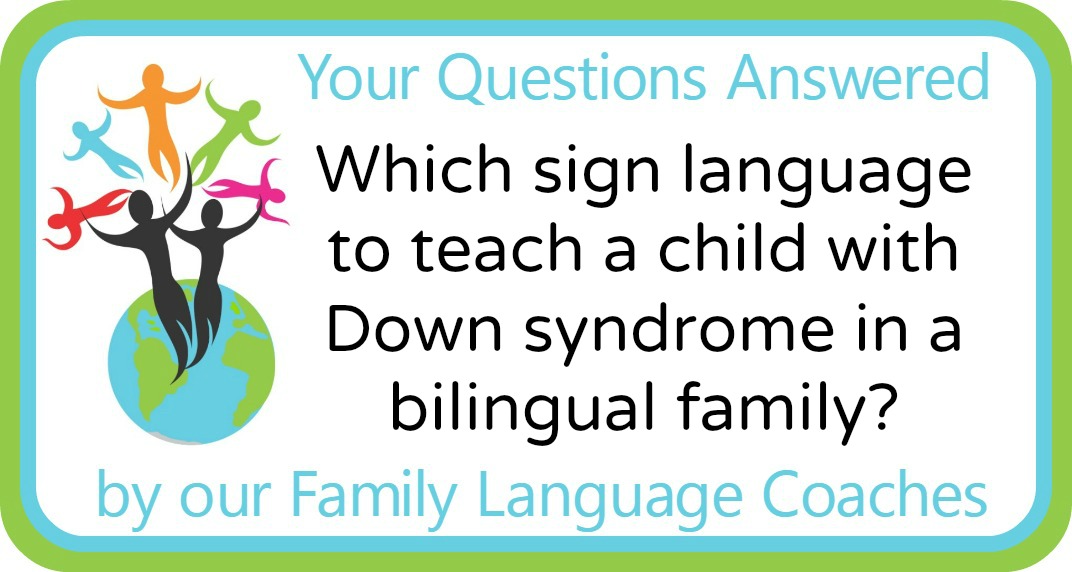 We are a family of three, and expecting our second child. Our daughter will be nearly four when her baby brother is due in November. I’m Finnish, my husband Irish, and we live in the US at the moment.

Even if we use English together, I’ve used only Finnish with our daughter since she was born, and she is fluent in both Finnish and English. Our son has been prenatally diagnosed with Down syndrome, and we’re thinking of learning some sign language already beforehand. Any ideas on how to do this? Especially, which sign language/languages we should use? Just American? Or Finnish and American?

Then again, we might not stay in the US for too many years, so would it be more beneficial to use Irish instead of American? I don’t know any sign languages and how much they differ, so help would be highly appreciated!

Thank you for your question and congratulations on welcoming a new member to your family in a couple of months!

It is indeed a great idea for you, your husband and your little daughter to learn some sign language in expectation of the arrival of your son. Children with Down syndrome have been found to benefit from being taught a sign language alongside spoken language to facilitate communication.

Most children with Down syndrome do learn to speak, although their language development is usually slower than normal. However, their need to communicate is as strong as any other child’s at a young age, so sign language can be used as a transitional communication mode until the spoken language has developed. In some cases, the continued use of signs alongside spoken language has also been found to be beneficial.

As you are using the one parent, one language (OPOL) approach with your daughter, I presume you will continue this with your son. He will learn Finnish from you and English from his dad and the environment, as you will live in an English-speaking country. For this aspect, I recommend that you join the Bilingual Children with Developmental Differences Facebook group run by Eugene Here, whose interview you can find here. Also read Professor François Grosjean’s interview with Elizabeth Kay-Raining Bird: Supporting Bilingual Children With Special Education Needs.

However, as you may use the sign language for a transitional phase only, another option for you to consider is a different Augmentative and alternative communication system. For example, Makaton is a “language programme using signs and symbols to help people to communicate. It is designed to support spoken language and the signs and symbols are used with speech, in spoken word order.” Widgit is another system designed to help children and adults with communication challenges.

You may already be aware of these, but I will list some further websites for you to visit:

I also recommend you to reach out to other parents in a similar situation to yours to learn about others’ experiences and to build a support network for when your little boy arrives. You can do this for example through the mentioned Facebook group or the above organisations.