Q&A: How strict should OPOL-parents be with their languages when speaking to a small child? 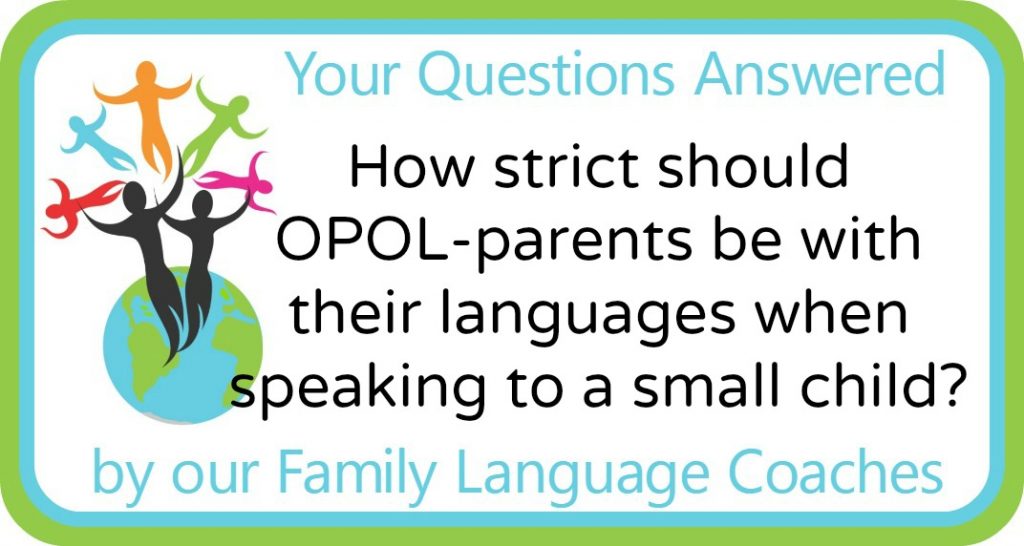 Thank you for the good advice on multilingual parenting.

I am Dutch and married to a Jordanian (Arabic-speaking). We talk English amongst each other but try to stick with our mother tongues (Dutch and Arabic) when talking to our 15-month-old son. He is very talkative and has quite a vocabulary already. We used to live in Jordan but recently moved to the Netherlands. Most of his vocab is now Dutch: I was able to spend more time with him than my husband plus I am naturally very language-focussed and have always used a lot of words with my son.

My husband is less used to/comfortable with using a lot of real language with our son. However, he is speaking with him much more now than in the beginning. My son gets very excited when he is being understood and when we can communicate, he gets so proud when he names the objects around him correctly or when he can make clear what he wants.

Question is: I know quite a lot of Arabic and do understand the few words my son is speaking in his father’s language. Do I reinforce him/praise him when he proudly and correctly uses an Arabic word with me, by repeating that word? Or do I switch to Dutch and tell him the Dutch word for that same object? Same thing for my husband, who has adopted quite a lot of Dutch in speaking to our son – I think he has heard me talk to him so many times and not being used to so much speaking in his own language, it might have been a less awkward start for him to just follow my way of speaking instead of his own.

Recap question: how strict should we apply OPOL? On the short term I think my son would be disappointed/confused if words in one language he just learned do (seemingly) not get the same confirmation from the other parent, because we strictly stick to OPOL. On the long term it seems more confusing to not stick to OPOL because then there will be this random mixture of languages between parents.

Your advice is highly appreciated,
Iris

Thank you for your kind feedback – we are always happy to hear that we can be of help!

You are using the one language, one parent (OPOL) approach with your son who is learning Dutch and Arabic and wonder how strict you should be with sticking to your respective native languages with him.

Sounds like your son is picking up his languages really well! I am glad to hear that your husband is speaking more to him, as this is crucial for your son’s Arabic. Your husband’s role is all the more important now that you no longer live in an environment where there are many other opportunities to interact in Arabic.

Using the OPOL method does not mean that you should never ever use “the other” language. Bilingual people naturally switch between languages and this is the role model you already are for your son. As you and your husband speak English with each other, he is used to both of you speaking more than one language. As you have been consistent in using your native languages with him, he also knows which language “belongs” to whom.

It is however perfectly fine for the both of you to reinforce your son’s language development in both languages and to confirm when he says a word in either Dutch or Arabic. I am all for championing a child’s language learning and give as much praise and encouragement as possible.

The way you could do this when your son says a word in “the other language” (and you know that he is using the right word), is to say “Yes, daddy/mummy says . Well done!” Then you give the word in your language “Mummy/Daddy says ‘’”

To reinforce your son’s learning, it is good to repeat the word in a few contexts. Let’s say your son uses the Dutch word for ‘ball’ when speaking with your husband. Your husband could say, in Arabic: “Yes, mummy says , very good! Daddy says . It is a big ball. The ball is green. Would you like to play with a ball?”

Using this approach, you are still encouraging and confirming your son’s language learning, but you are also making the distinction between “mummy’s language” and “daddy’s language”.