Q&A: How to support a bilingual child with dyslexia? 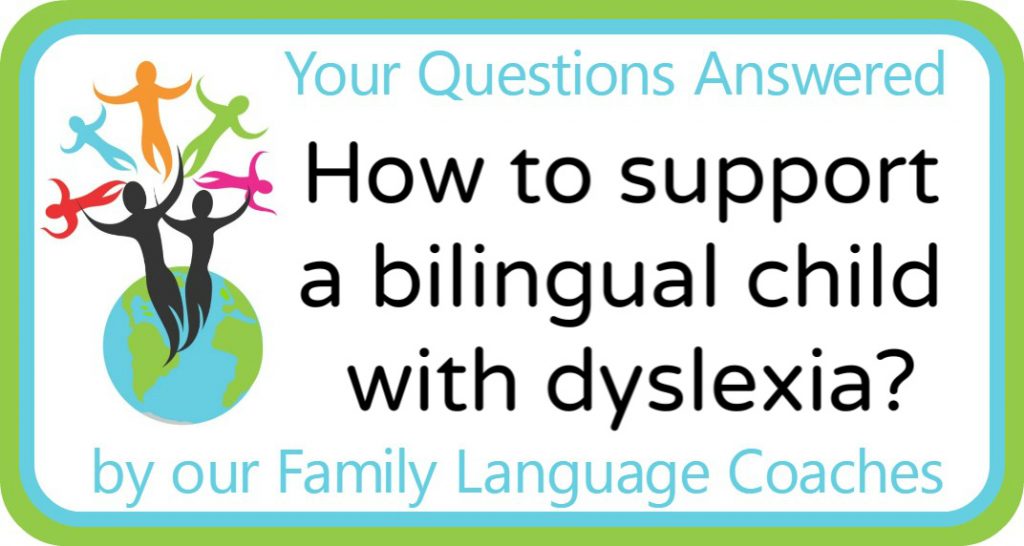 Can you please advise us on the following with regards to a 7-year-old?

The boy’s mother is Australian, the father who he visits is Australian. His step father is from Pakistan and speaks Urdu, English and Arabic.

The boy has been to Arabic Maktab but was not able to get past the first page after many weeks. Later the Public School got him tested as he was struggling at school and found out he is dyslexic.

The majority in his life community is English but parents would like him to learn Arabic due to being Muslim. The mother wants to know how she can help and any resources she can get access to.

Thanks so much for your question. The situation is about a 7-year-old boy and the languages in question are English and Arabic. His stepfather is from Pakistan and speaks Urdu, English, and Arabic. The family wants to support his development in Arabic as he is Muslim. He has had some formal instruction in Arabic in Arabic Maktab but progress was slow. He has also been identified as having dyslexia.

In order to answer your question fully, I would need to fill in some gaps in the information. For example – what variety of Arabic are we talking about? There are more than 30 different varieties of Arabic across the world and vocabulary and grammar varies across these varieties and between these varieties and Classic Arabic, and Modern Standard Arabic (MSA). Classical Arabic is in the Qur’an and classic literature while MSA is used in formal writing and formal television shows. As far as I’m aware and I could be wrong here – MSA tends to be learned in school whereas conversational Arabic is what children tend to learn as a first language. (It’s also called Spoken Arabic Vernacular or SAV). And acquiring Arabic tends to mean acquiring both SAV and MSA.

When did the boy start being exposed to conversational Arabic? Has he been exposed to conversational Arabic for everyday purposes or does the family want to focus more on the more formal standardised language for education and religion? And is it his stepfather who will be the main source of Arabic for him? Factors that influence development of the second language are things like:

I’m going to focus here on the issue of having dyslexia and learning two languages.

What exactly is dyslexia? There are two ways of looking at it. Firstly, you can look at it from a deficit point of view. This means you think of it as a neurodevelopmental disorder involving trouble reading words accurately or fluently. Difficulty that cannot be explained by hearing loss or a learning disability for example. Neurodevelopmental means development of the brain and there is evidence to show that children with dyslexia show that on average, the brains of people with dyslexia are structurally and functionally different from people who do not have dyslexia and that these differences are not limited to the language regions of the left hemisphere of the brain.

The consensus is that people who have dyslexia struggle with reading words because they have difficulty processing the individual sounds of language and matching those sounds with letters and letter combinations. These deficits tend to have a spill-on effect on other literacy skills like understanding what you are reading and also writing. Dyslexia is a life-long condition.

However, there is another way of looking at it. It is called the neurodiversity view where these differences in people’s brains are not thought of in terms of pathology or something broken in need of fixing but more a result of the normal variation that occurs in human genetics and development. From this perspective, dyslexia is a component of a person’s identity and not a defining feature. The goal then is not to cure the problem or try to fix the person but to work with child to help build their reading capacity. Educators also contribute by designing curricula and educational experiences that allow all students to participate meaningfully.

When it comes this family’s situation, be reassured that the boy can become bilingual. Having dyslexia does not mean he cannot become bilingual. The family needs to work out what bilingual means for the family and for him. It doesn’t have to mean fluent in listening, speaking, reading, and writing Arabic and English. What will affect his proficiency in Arabic are the points I made at the start – like the amount of meaningful exposure he gets to it, the number of opportunities he has to use it, and his individual motivation in relation to Arabic. This will most likely vary over time – that goes with the territory and the main thing is to keep your eyes on the long term goal of raising a multilingual child. I would suggest starting small – language  development takes a lot of time – years!

What can be done to help a child with dyslexia?

If he hasn’t had a speech and language assessment yet, then I would recommend this as children with dyslexia can struggle with other aspects of language. This would involve assessment of a range of language areas such as phonology (to do with being able to identify and produce words that rhyme for example, being able to manipulate sounds like if you take the cow out of cowboy what is left?), spelling, the structure of words like how to make plurals or past tense, vocabulary and grammar. Ideally, a thorough investigation of each area would include both understanding and expression task.

The family should work closely with his teachers for ideas to help him have positive reading experiences with materials that he is genuinely interested in.

In relation to Arabic, I would start with conversational informal Arabic (SAV) because oral language skills like vocabulary are foundations for learning to read. You could get him to teach his mother some words – my daughter loves being Irish language teacher to my husband and gets a great kick out of correcting his pronunciation! It is also important to keep this as light and fun as possible. The family could go to local cultural festivals if they are available. The mother can watch cartoons or learn songs together with her son – the key thing here is together as children need interaction to learn the language. Here’s how to make the best use of screen time in order to build up his Arabic: Making the Most of Screen Time for Language Development. How about cooking together using recipes in Arabic? An adult will have to do the reading initially, but the conversation can be in Arabic. Accept his responses in English – it is about building capacity. How about doing the grocery shopping together and learning the names of the fruit and vegetables etc. in Arabic?

It is important to help him have positive experiences related to reading in English and Arabic. How can this be done? It would be things like finding things to read that he really likes. How about ordering at a favourite restaurant and using the menu at home to practice reading? If there are pictures on the menu alongside the text all the better, as they will help him link the written word to its meaning. As for writing – how about sending cards to family members? Leaving notes to surprise his step-father? It needs to be fun and communicative.

Another thing to do is to have conversations about how English and Arabic are similar and different as languages. Children who struggle with language need help with these connections. So, in English we read and write from left to right. In Arabic, it is from right-to-left. 26 letters in the English alphabet, 28 in the Arabic one. There could also be conversations about the differences between SAV and MSA.

Word games are also useful and fun. So pig +let = piglet. The -let bit means little or baby – can you think of other words that have -let at the end that are real words? What about read + ing= reading? Talk about verbs and how when you add on the -ing it tells you the action is happening now – the present tense. Working on these word skills in English has been found to help children with dyslexia with English reading. You can do similar games for Arabic – I just don’t know enough about the language to be able to give you specific examples.

Using magnetic alphabet letters to make up random words and reading whatever combinations have been put together – this helps with phonics. Using texts that have pictures alongside, as these make reading easier because they give important clues about meaning.

The International Dyslexia Association also has some useful information and you can find it here.

What I read so you don’t have to:

Hogan, T. (2018) What speech and language pathologists need to know about dyslexia. Language Speech and Hearing Services in Schools 49(4) 759-761.

Rappolt-Schlichtmann, G., Boucher, A., Evans, M. (2018) From deficit remediation to capacity building: learning to enable rather than disable students with dyslexia. Language Speech and Hearing Services in Schools 49(4):864-874.

Wishing all the family every success on the bilingual journey!