Q&A: How to support a child’s minority language which you are not fluent in? 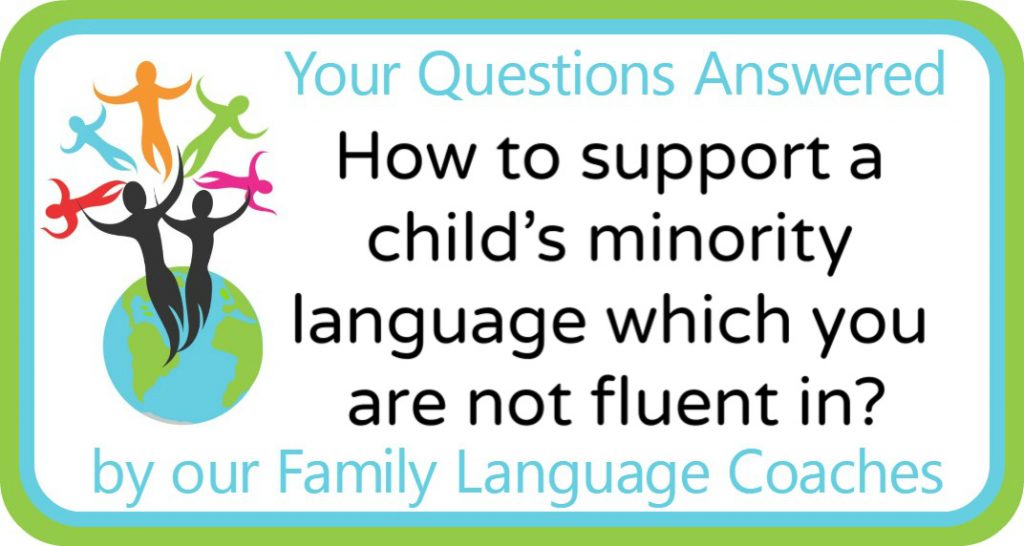 My question might be a bit complicated. I have a 17-month-old daughter. I speak Hungarian to her, my husband speaks Spanish and we speak in English with each other. We currently live in Hungary and the main language of the community is Hungarian. We are planning to move to Mexico but not for a while, maybe in seven years.

I’m with my daughter all day every day. Very rarely does she stay with my husband and even then, only for a few hours. The one to one time between my husband and daughter is pretty rare. He goes to work when she wakes up, so they just say good morning to each other. They spend about three hours together per day, but sometimes my husband has extra work at night so often he is home but with not much interaction between him and our daughter.

So far, we haven’t been visiting places where English or Spanish are spoken. She hears them when her dad is home or when we call my husband’s family. She also hears English when we meet with friends because my husband doesn’t speak Hungarian.

How could I help strengthen her Spanish? I’m still at a very beginner level of speaking it. She was born in the US, so we would like her to speak English too, but Spanish and Hungarian are more important because of the families. When she gets a bit older she could go to Spanish daycare at least a few times a week.

I was wondering if my daughter will speak all three languages like I speak my mother tongue, or will one of the languages be dominant and the other two more like a second language? I can express myself a lot better in Hungarian and it is a totally different feeling when I speak it than when I speak a foreign language. Hungarian is a big part of my culture and even my identity.

Thank you for your question about your daughter’s three languages: Hungarian, Spanish and English, with priority being on the two first ones.

Your daughter is fortunate to grow up in an environment where she is regularly exposed to three languages. Your two main questions are about supporting her Spanish and how the different languages will be part of her identity when she grows up.

As you live in Hungary, and you stay with your daughter during the day and speak Hungarian with her, Hungarian will become her first and dominant language. The other side of her family are Spanish-speakers, so you want her also to become fluent in Spanish. English will also play a big role in her life, as this is the language you and your husband speak with each other.

How to support Spanish?

Since your daughter only has a very limited one-to-one time with her father, Spanish is the language that will need some extra support to increase the exposure time. It is great that you know some Spanish, as this is a good base to work on. What you could do is to improve your Spanish alongside your daughter learning it. Here is a great post to give you some ideas. I can also recommend Christine Jernigan’s book Family Language Learning: Learn Another Language, Raise Bilingual Children. Once your own Spanish-skills improve, you can agree “Spanish-only” times at home, when you all speak Spanish together. If you can understand Spanish, then do ask your husband to speak as much Spanish as possible at home. It is okay for you to respond in English, in case you are unable to do it in Spanish.

Finding daycare in Spanish would be a great way to increase the exposure time for the language, so I would recommend that you go for this, if the opportunity arises. If you were to move to Mexico in seven years’ time, it would not take long for your daughter to become fluent in the language once she would be immersed in it every day.

Also engage the Spanish-speaking side of the family as much as possible in supporting your daughter’s Spanish-learning. Here are some ideas for “long-distance” language and cultural support.

What part will the languages play in your daughter’s identity?

As mentioned above, Hungarian will initially and as long as you live in Hungary be your daughter’s strongest language. She will grow up learning about the culture and will closely identify with it. Should you move to Mexico when she is young, it will be up to you to continue maintaining and developing her Hungarian and closeness to the culture.

How well your daughter will speak Spanish, depends on how much exposure you can arrange for it. The same will go for the culture – the more Mexican culture you can introduce into your family life, the more familiar and close your daughter will feel to it. Since she will speak the language with her father, Spanish and the Mexican culture will be an important part of her identity.

With your setup, using the one parent, one language (OPOL) strategy – you speaking Hungarian and your husband speaking English with your daughter, English will be the minority language and will not be as strong as Hungarian and Spanish. She will however most likely learn to understand English quicker than you think – keep this in mind if you think you have a secret language! This is called receptive bilingualism. Unless she also communicates in English with someone, it is unlikely that she will start speaking it. This could however quickly change, for example if you were to move to Mexico and she would attend an English-speaking school.