Q&A: How to support a trilingual toddler with her family languages? 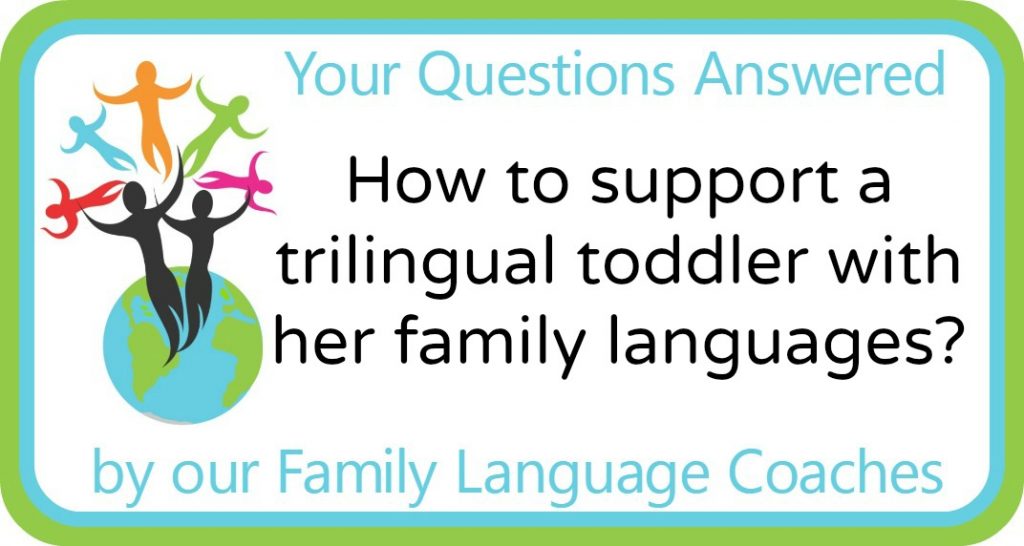 We are a Spanish mum and German dad living in England, and our 18-month-old doesn’t speak any words other than “no”. Should we be concerned?

I speak very little German and my husband speaks Spanish, but we are just too used to speaking English. We try during meal times to speak in our native languages. I can understand enough to reply but I do it in Spanish.

We both have been able to learn four languages, so we know one can learn languages even as adults but as much as I read about multilingualism and speak to people in similar situations, (although for most is only two languages) I still worry about the best way of doing everything.

We take our daughter to German and Spanish baby groups. And I read that it is important to at least expose the toddler 30% of the day to the language, so when my husband is travelling I read to her in German and I’ve even learned many German songs.

I guess my question is very vague, but I do feel a bit lost about the whole situation, the only plan we made was to speak to her in our languages no matter what. But should we try speaking less in English and trying more each other’s languages?

I will be very grateful for any kind of answer, thank you!
Ana

Thank you for your message about your little daughter growing up trilingual in Spanish, German and English.

With regards to her language development, keep in mind that there are big variations between children as to the pace at which they proceed – please read this article as well as this Q&A which will give you some pointers.

There are two important aspects that you should consider: does she understand simple commands in any of her languages? Can you see a progress in her understanding and communication (including non-verbal)? If the answer to both of those question is no, then you may want to consider asking for an appointment with a speech and language therapist who is used to dealing with children who speak more than one language. It is not that I think there is an issue, it is more that I would like you to have a peace of mind.

Your one parent, one language approach is fine, and I commend you for being consistent in using your native languages when you speak with you daughter. It is also okay that you use English between you, it will not confuse her. Because you have two minority languages at home, it would however be beneficial if you could reduce the amount of English in the home. I know this may not be an easy thing to do – please note that is absolutely fine to use different languages in a discussion. You can answer in Spanish when your husband says something in German. Like any new habit it will take some time to get used to speaking more Spanish and German with your spouse but do give it a go.

It is brilliant that you have the chance to take your son to play groups in both Spanish and German, it is very beneficial for a child to see that also other children speak the languages their parents speak at home.

Feel free to read books and sing songs both in Spanish and German, if you wish. Note that the thirty percent exposure time per language is a great goal to have, but it is not an absolute amount required for a child learning the language (nor is it a guarantee, for that matter). Although often quoted, this figure has not been proven by any research to be the crucial time limit. There are simply too many variables to be able to determine such a limit, most importantly the quality of the exposure. There is a big difference as to how effective the exposure is if a child watches a children’s programme in a language or spends the same time interacting in the language with another person.

By what you write, you are on the right path and doing all the right things for your daughter to become trilingual. If you feel concerned about your daughter’s language development, please, do contact a specialist for peace of mind. It is always good to discuss such matters with a professional.