Q&A: Three family languages – how to pass them all on? What about adding others? 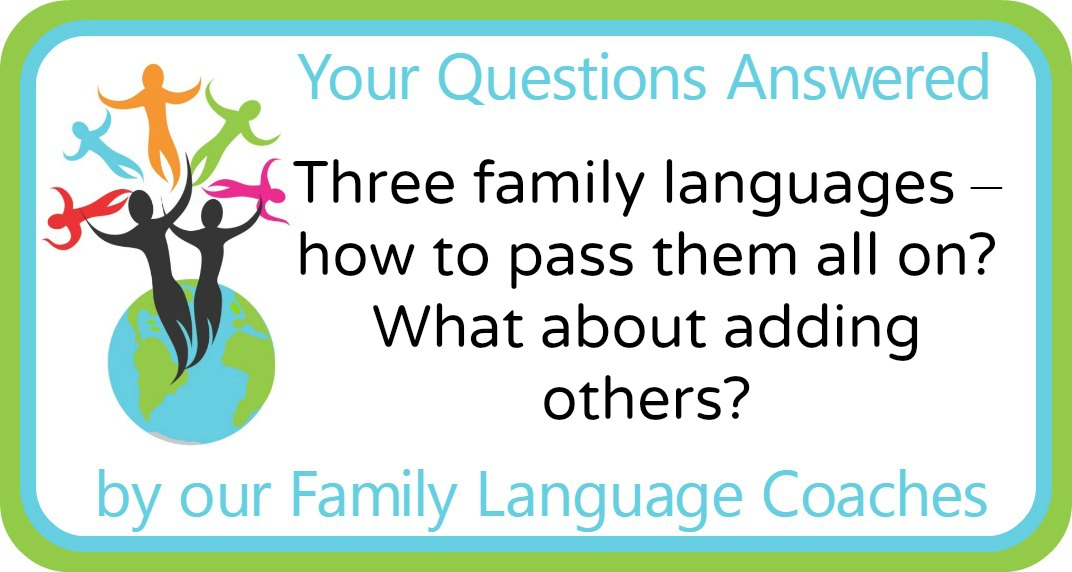 I have a 4-month-old baby boy. I will stay at home with him the first year with a possibility of a few more depending on daycare availability. We live in Quebec, Canada.

My native language is Spanish. I’m fluent in English, French, have a basic knowledge of ASL, Portuguese and Italian. His dad is bilingual English-French only. While in the womb he heard English and French on a daily basis. Now I speak to him in English most of the day. Sing lullabies in Spanish and use some French in between without noticing. I use a bit of ASL only if I’m not holding him so I can sign with both hands. School choice will most likely end up being a French one as we are in Quebec.

I was wondering if I should continue this way with all languages or concentrate on any in any specific way. I wish for him to be fluent in many languages. I have read the best chances for it happening is introducing them before the first year of age.

I took basic levels of Spanish sign language, Russian and German over 10 to 15 years ago however never used them so I feel like I have lost them. I have always been passionate about learning languages! I have flash cards for learning ASL, Italian and Portuguese but not sure if it’s a good idea to use them with my child now or even later.

Thank you for your time.
Cynthia

Thank you for your question about bringing up your son with several languages.

You are fortunate to live in a country where there will be natural exposure to two languages, French and English. As your son will attend a French-speaking school, French is likely to become his strongest language. And since English is the other community language and one of your home languages, no doubt he will also become fluent in English.

Your native language is Spanish, so you are in an excellent position to pass this language on to him, making him trilingual early on in life. Spanish is the only language for which there will be no other external natural exposure (unless you have extended family around). Thus, my recommendation would be that you focus on speaking Spanish with your son. With two other languages competing for position, the best approach is to concentrate on the one which there will be least exposure to.

If your husband were to speak English with your son, this would guarantee a solid English foundation. You could still have French as your common language, if you wanted, and bring in French for your son at an early age this way. To recap, in this scenario you would speak Spanish with your son, your husband English and your common language would be French. Alternatively, you could use English as the home language and leave the French exposure to nursery, school, media and the general environment.

Note that even if you choose to speak Spanish, it is absolutely fine to occasionally sing songs in English or play in French, for example. However, for your son to grow up speaking Spanish, you would, as a general rule, need to stick to Spanish with him.

With regards to ASL, feel free to use it alongside the spoken language with your son, if you like to do so. Knowing some sign language is especially useful for small children at the stage where they want to communicate but are not yet able to talk. Many parents use baby signing for this very reason (different from ASL).

Language skills are a great gift for a child. It is however important that there is a need for the child to use, maintain and develop a language beyond learning the basics. I can see that you have ambitions of adding other languages to the mix for your son, but I would recommend that you concentrate on the three main ones to start with.

Once your son has mastered these family languages, then you can think of introducing more through play. Whether or not you want to use flash cards for this, is not a decision you have to make now. By then you will know what your son is interested in and what would be the best way to explore a new language together.