Q&A: How to help a toddler exposed to several languages with her speech development? 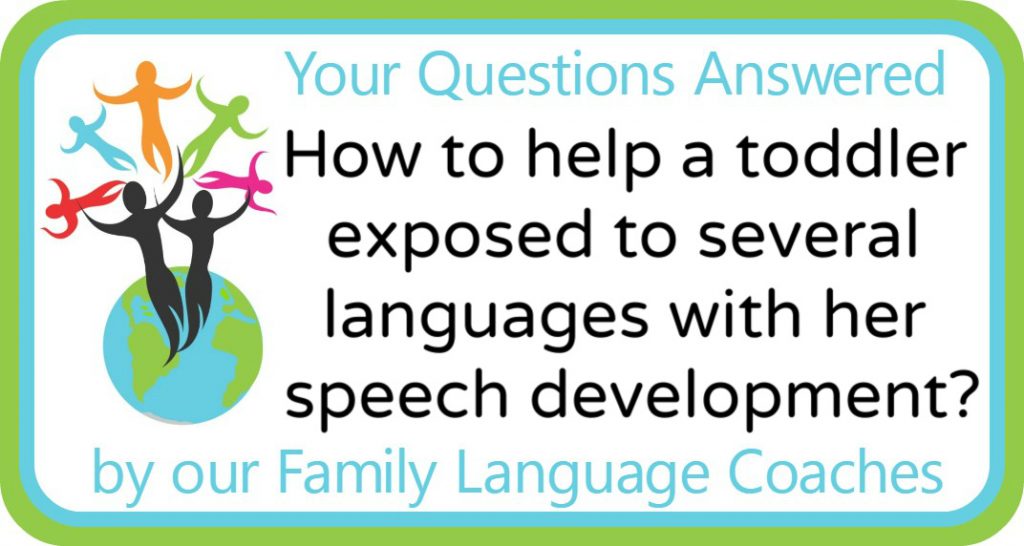 My first language is Arabic, my 2-year-old child is American. Me and my daughter live in Netherlands where people speak Dutch. I don’t know which language my daughter will end up speaking. I talk to her mostly in English, but sometimes in Arabic.

How can I make her learn English without either Arabic accent or Dutch accent, so she doesn’t feel weird when she meets her cousins in USA? I’m trying my best to not talk Arabic to her because we live in Holland and the community language is Dutch. I feel it’s so confusing for her to hear Dutch language, then I talk to her in English and sometimes in Arabic. Dutch people also sometimes speak English, so it is confusing for her.

She is going to turn 2 years in 5 months, but she ended up speaking so fast things no one understands. She says sometimes “tanko” as “thank you” but she doesn’t understand the whole meaning of it. She gets confused sometimes between “thank you” and “take it”. She used to say “take it” when she gives me something. then I tell her “thank you” after I take it from her, so from there she forgot about the word “take it” and started to say “thank you” before she gives me what she wants, when she means “take it”. She can’t differentiate between “hi” or “bye”. She switches between them sometimes.

She is a talkative baby but mostly no one understand what she says 😥. I am so worried. Please help me on how to make my daughter talk clear words. She is so talented, lovely, social, and healthy but I’m so worried about her speaking development. Her speaking is not consistent.

Thank you for your heartfelt message describing how concerned you are about your daughter’s language development.

The first and most important thing I want to tell you is: please do not worry. Your little toddler is only 19 months old and is doing fine with her English! By what you write, here language development is well within the expected range for her age.

Enjoy this short precious stage of her life when she is learning to communicate and exploring the words and phrases she is picking up. The examples you mention about her mixing thank you and take it are perfectly normal language behaviour for a toddler. Be happy that she has learnt to say both Hi! and Bye!, but please don’t expect her to know the difference yet. She will learn it in due course. For now, she knows that those are words you say when a person comes or goes – which is fantastic!

You ask how you can help your daughter grow up speaking English without an accent. From this I take it you mean that you would prefer her to have an American accent, as there are several English accents across the world. Unless children get most of their language exposure from native speakers, they will pick up the accent from the person(s) they spend most time with. If your daughter will hear most of her English from you, then she will most likely have an Arabic accent, if this is what you have.

Before I explore this any further, I would like to touch upon accents in general. Most people who speak more than one language have an accent in some (or even all) of their languages. This is also perfectly normal. Language is first and foremost about communication, not perfection. I am a big fan of the quote: “Respect those who speak with an accent, they most likely know one more language than you!”

You want your daughter to be able to speak with her relatives in the US and become a fluent speaker of English. This you can achieve while living in the Netherlands. If you wish her to sound like an American, then you would need to arrange so that she can spend a considerable amount of her time with native American-English speakers. This may well be possible where you live, for example, try finding an American-English nursery she could attend. Also, should you move to the US while your daughter is small, she will quickly pick up a native accent when she is surrounded by the language.

You write that you don’t want your daughter to feel weird because of how she speaks English when she meets her American cousins. Please be very careful not to transfer this fear onto your daughter. As she learns to speak more, she will be happy to speak with anyone without any concerns. Please do not emphasise the importance of accent and correctness, allow her to enjoy her ability to communicate. If you are worried about her relatives’ reactions if her English does not sound American, please speak to them in advance. Tell them how proud you are that your daughter can communicate with them in English and that she is learning more and more every day. Ask them not to pick up on her accent or any mistakes she makes.

Children do not get confused by hearing different languages – if anything, it is adults who tend to find such situations difficult. If your daughter hears and interacts in Dutch, e.g. through daycare, she will most likely also pick up Dutch. It all depends on how many hours a day she spends surrounded by Dutch and how long you stay in the country.

You mention that you speak both English and Arabic with your daughter. Is this because you want her to also learn Arabic, or because you feel more comfortable using Arabic in certain situations? Independent of the reason, what I think you should also consider, is that Arabic is an important part of your daughter’s identity and heritage. For her to be able to connect with your side of the family and culture, knowing Arabic would be a huge advantage.

If you want her to learn Arabic, my suggestion would be to only (or at least mainly) speak Arabic with her. This is the age when it is easiest for your daughter to pick up Arabic, which would be a great gift for her future. If you could arrange e.g. American-English daycare for her, your daughter would grow up learning native Arabic from you and native American-English at daycare. As you live in the Netherlands she would also be exposed to native Dutch. Many children grow up trilingual this way, and it is not the least bit of confusing for them! Yes, they may mix words and phrases to start with, but they soon learn to keep their languages separate.

If you choose to speak both Arabic and English with your daughter, then I would suggest that you decide on when to speak which language. You would use a variation of the time and place family language strategy. You could for example speak Arabic at home and English when you are out and about. Another option is to use English only in certain situations or areas. You could dedicate a room in your home where you will always speak English, or use only English on Sundays or some other day of the week. I know such arrangements always take some time to get used to, so you need to find the one that suits you.

The best way to support your daughter’s language development is to speak with her a lot and read plenty of books. Use natural language and do not focus on “teaching” her words and phrases. Read this article for additional ideas for how to support a toddler with their speech.

The most important message I want you to take from my response is to enjoy your daughter’s language learning process, to talk and read with her a lot – and not to worry!