Q&A: What to do when it does not feel right to speak one’s mother tongue with a baby? 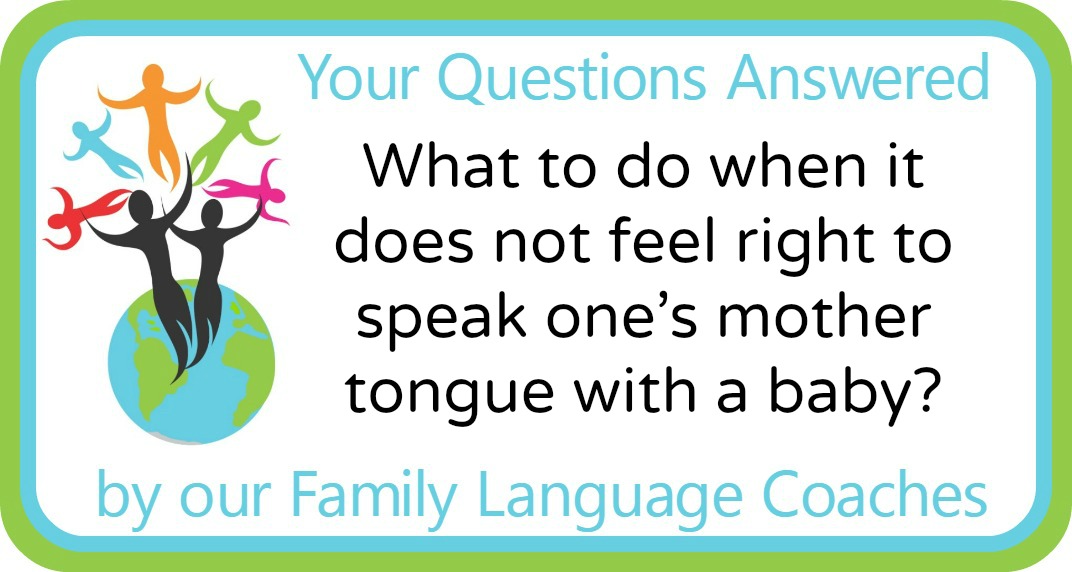 I just found your site, so first of all congratulations, it is incredibly useful!

I was trying to find out what method to use with our future kids, I’m Hungarian native, my husband is Italian and we live in Italy. I speak Italian like a native and I also speak English and Spanish fluently, I work with languages.

The problem is that I find it hard to speak my mother tongue in family. My husband speaks some Hungarian but I’m just not able to speak to him in Hungarian, we have always used Italian between us. Now that we are trying to have a baby I was thinking, what if I won’t speak Hungarian to him or her right after birth? I could introduce the language later with songs, fairy tales and games. I used to teach Italian to three and four-year-old foreign kids like this and by the end of the school year they were fluent.

My husband agrees with me, but I was wondering if this could work or should I force myself to speak to our child in Hungarian. Also, I’d be happy if our kids could benefit from the fact that we speak so many languages in family and that we are international. My sister-in-law is Spanish and they already have a son. So our Italian-Hungarian child is going to have an Italian-Spanish cousin.

We would be grateful for some advice. Thank you very much in advance!

Thank you for submitting your question to the Multilingual Parenting Family Coaching Team.

That’s wonderful that you speak so many language and what a great advantage when it comes to raising multilingual children.

What you are describing in your question is not uncommon. Many people, typically adults, feel very strange changing the language they speak to a given person after they have grown accustomed to speaking another language.

You do not necessarily have to change the language you use to communicate to your husband once your little ones are born. You can still continue to speak to them in Italian! Many families speak different languages to different family members. It sounds so strange when you are first starting out but I promise you, it can certainly be done. In my home, I speak Spanish to my children and English to my husband.

To answer your question, introducing your children to Hungarian at a later age could work. Your children could become fluent if you introduce it later on in life as long as you provide them with the right amount of exposure and they feel the need to communicate in Hungarian. You can certainly start at age three and four since as you mentioned in your question you have experience with that age group.

Yet I would suggest that you do in fact commit to speaking Hungarian to your babies from birth!

You will likely find that it is much easier to start right from the beginning if you can make that happen.

The beauty of starting from birth is that you can start the transition as a family slowly and work your way to more involved linguistic exchanges as your children grow. Life with a new baby will bring many changes and language can be one of them!

Research has shown that the earliest form of language learning begins in utero when the fetus can start to recognize the sound of his mother’s voice. A mother’s voice can have a calming effect on the fetus as early as seven months into a pregnancy and a baby’s heart rate slows down with just the sound of mama’s voice. As a fellow mom, that just makes my heart melt!

After birth, infants technically start their language journey around four months of age as they begin to engage in babbling. Those that are exposed to more than one language from birth can start distinguishing speech from an astonishing young age.

In fact, research has shown that after only six months, they can tell the difference between languages. For languages that tend to have similar intonation, tone, stress and rhythm it may take a little longer. Yet even then, most children can start detecting the difference just a few months later.

I share this with you to encourage you to give it a shot from the early stages. Many parents feel that baby talk comes easier in one language versus the other. Even those that are native speakers of a language but have been around a community language for years, feel a little strange in the early days. However, most of the ones that commit to sticking to their mother tongue for the first few months eventually make the full transition and few, if any, end up regretting it.

You can always try it for a bit and if it does not feel natural within your family dynamics, make the switch back to Italian.

Best of luck, Anna. with the arrival of your future children! It sounds like despite which path you choose, languages are going to be a big part of their life! May you all enjoy the ride together.

Marianna Du Bosq was born in Caracas, Venezuela where she spent the majority of her childhood as a monolingual speaking only Spanish. Until one day, right before her thirteen birthday, her family moved to the United States and her adventure and passion for language learning began! Her love for languages started with her own experience and grew into a desire for teaching others leading her to spend several years in the classroom teaching dual language learners. She is now facing the most challenging yet rewarding facet of her life, that of a multilingual parent with a mix of English, Spanish and German! Marianna is the blogger and podcast host at Bilingual Avenue where she interviews multilingual parents sharing their best practices along with experts in the field of multilingualism providing actionable tips and strategy. She has a Master’s in Education with an emphasis in Curriculum and Instruction.