Q&A: Who should speak what language when in a family with three languages to raise a trilingual child? 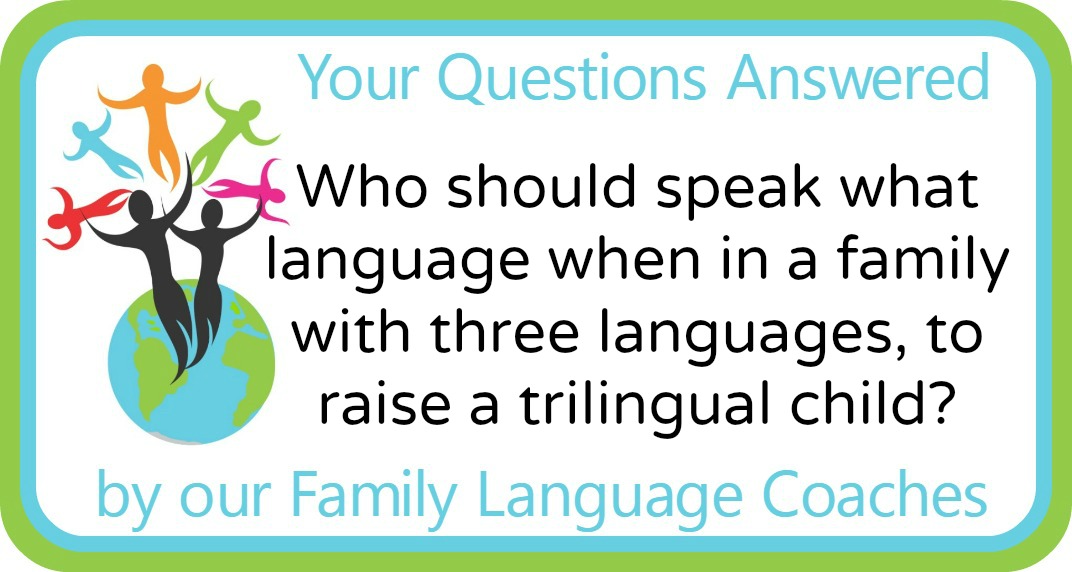 We’re a multilingual family living in France. My name is Teresa and I’m Spanish, my husband is French and our common language is English (we started our relationship in California). Now we can communicate in French and Spanish also but we usually speak English together.

We have a one-year-old baby girl, I’m taking care of her for the moment but she will start the nursery in four months. I’m not sure if we’re doing everything ok. The idea was to use the OPOL method: dad in French, mum in Spanish, and English together.

So my first question is if I’m doing it correctly. Or maybe I should speak to her in Spanish in the morning and in French in the afternoon?

My second question is about what to do when she’ll start the nursery. It’s ok if during the working days we speak to her in Spanish? And the weekend mum in Spanish, dad in French and English together? Or is better to switch to Spanish our common language and keep speaking to her in our mother language?

I feel a bit confused. I know she’s going to learn French at school/nursery, but I want her to be able to communicate in Spanish and I don’t want her to lose the opportunity to learn also English.

Thank you very much! And thank you for your blog. It’s very interesting and very useful.
Teresa

Thank you for your lovely feedback and your question about raising your daughter to become trilingual in French, Spanish and English.

For a child to learn to speak a language, there needs to be enough interactive exposure in the language. What ‘enough’ is depends on many different factors and there is no simple answer to this. A third of a child’s waking hours is a figure often quoted, however, I have not come across any reliable recent research which would confirm this. While it is a good goal to have, I know that children can grow up with less exposure than that. The quality of the exposure is of paramount importance, so for a child, 30 minutes of communication with a parent is far more effective than two hours of watching a children’s programme in the language.

You have two minority languages which you want to pass on to your daughter: Spanish and English. Like you say, French is the least of your worries as your little girl will pick up the language very quickly once she starts nursery.

I know that it can be very challenging to be consistent with your language use when you are used to switching between languages depending on the topic, mood or other people participating in the discussion. It is even more difficult if your partner also knows the same languages so that it does not matter which language you speak, you know that you will be understood.

When it comes to your daughter, the way she will learn Spanish as she is growing up is that you speak the language with her. Once she starts nursery, the amount of time you spend with her will significantly decrease, so your Spanish one-to-one time with her is precious. For this reason, I would recommend that you stick to Spanish as much as possible with her. Once she attends nursery and school, French will become her strongest language. If she is used to you also speaking French with you, then it can easily happen that she starts preferring French in all her discussions with you.

What I am saying is that establishing a solid routine to only speak Spanish with your daughter is your best “defence” against French taking over later. There is as such nothing wrong in speaking different languages with your child, but if your goal is for her to become a fluent Spanish-speaker, then the onus is on you to offer her the necessary exposure to the language. It much easier to establish a language routine and stick to it, than it is to try to turn the tide when the majority language starts to take over (although that can also be done).

To answer your first question, my recommendation would be that you stick to Spanish all day long with your daughter. You can still sing songs in whatever language you want, and it is also not a big deal if you sneak in the odd French phrase. However, make Spanish the overall main language between you and your daughter.

With regards to your second question, whether you and your husband should both speak Spanish with her during the weekdays, there are a few things you need to consider. If you were to replace your current common language English with Spanish, this would improve the situation for Spanish, as there would be more exposure to it for your daughter. However, if you did this, the English exposure would be reduced to very little. It is unlikely that your daughter would learn more than to understand some English. She would probably not start speaking it, unless you found some additional source of exposure to the language (such as a playgroup or a nanny). Also, would your husband be happy to switch to Spanish with your daughter during the week?

Independent of which way you decide, there will be little exposure to English, so you should set your expectations accordingly. Although she might not learn to speak English when she is small, you have plenty of opportunities to increase the use of English in the family as she grows and becomes more confident in Spanish (and French, of course). English is probably the language you will find easiest to arrange other forms of exposure to. In any case, she will have a basic understanding of the language which will be very beneficial once she starts learning the language at school.