12 silly questions a bilingual could ask a monolingual

by Rita | Jul 2, 2014 | Bilingual benefits, Bilingualism, Language, Language and bilingualism, Only happens to a bilingual, Top 10 most read posts | 14 comments 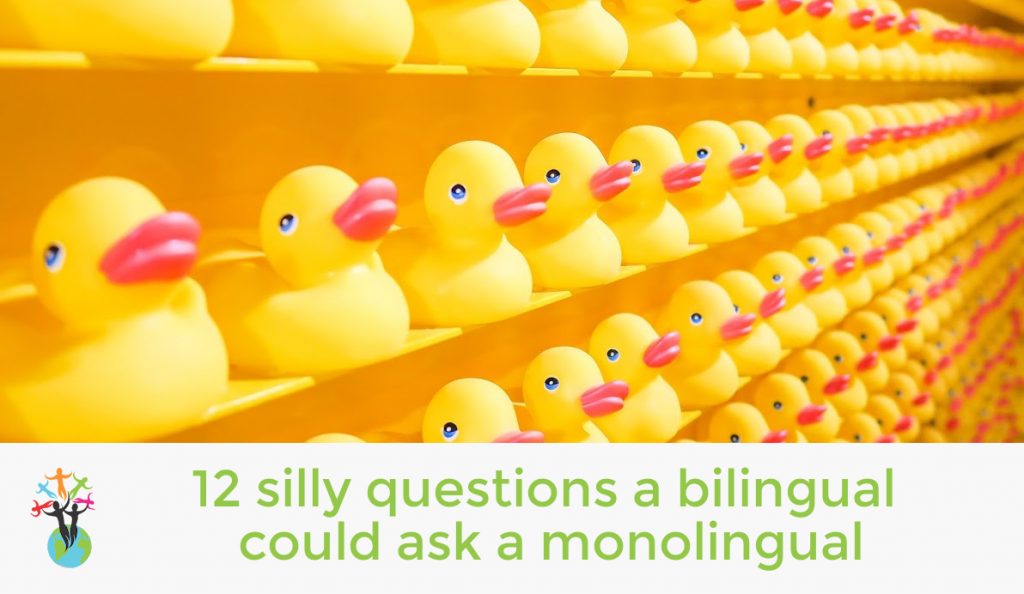 Throughout history bilingual people have been (and still are) asked some fairly silly questions. What if the shoe was on the other foot – what questions could we as bilinguals ask?

1 – What have you done to cure your monolingualism?

Bilingual people have been classed as strange and some people have wanted to shield children from the perils of speaking more than one language. What if monolingualism were instead to be classified as a deficiency that should be remedied?

2 – How does it feel to know only one word for something?

Bilinguals have been described as having a split identity because they have several words for the same things and phenomena. What if monolinguals were to be labelled as having “restricted” personalities?

3 – Why are you depriving your child of the advantaged of bilingualism?

Many parents of bilingual children have had to answer questions about why they are confusing their child or why they are making their child’s life so much more difficult with the many languages in the family. In today’s world there are several ways parents can help their children to learn another language – why wouldn’t they do it?

4 – How does it feel being a part of the monolingual minority of the world?

Depending on how strictly you define the term ‘language’ the estimates of how many people are bilingual vary between 55% and 65% – in any case, monolinguals are in the minority. However, in many places bilinguals are still not being considered when governments set their policies.

5 – When will you start speaking more than one language in the family?

Many bilingual families have been incorrectly advised to change their use of languages and stick to only one language – what if families were to be told to introduce another language instead?

6 – Why did you choose a monolingual school for your children?

What if immersion and bilingual schools were to become the norm and you would have pay extra to send your child to a monolingual school?

7 – Do you know how much less you will earn in your lifetime as you can only speak one language?

The estimates of the increase in earnings for bilinguals vary between 2% and 10% – in any case, a significant amount in anyone’s books. In addition, I think bilinguals should also get a tax break of at least 5% per additional spoken language. Are you with me?

8 – Most people are bilingual – how come you speak only one language?

Monolingualism has been the norm for so long, what if we were to start presuming that everyone should be bilingual?

9 – What do you do to exercise the executive control area of your brain?

By switching between two languages, bilinguals automatically do brain training which strengthens the executive control centre of the brain. This and other bilingualism benefits help bilinguals function longer if dementia hits us – so we are less of a burden to the health care system. We really should be awarded tax benefits!

10 – Children can learn two or more languages at a very young age – you are an adult, how come you haven’t?

Instead of just being amazed at the language skills of bilingual children – why not turn the spotlight on monolingual adults?

11 – Doesn’t it get boring to always speak the same language?

That’s a thought now isn’t it? If you do speak more than one language, can you imagine speaking only one? Variety is the spice of life – why only speak one language when you can learn two, three or more?

12 – Was it a hard decision to stay monolingual?

What if all communities and schools were geared to ensure that everyone becomes bilingual and that staying monolingual would have to be a conscious decision which you would have to defend from time to time?

These questions are tongue-in-cheek and (mostly) unfair, and I am certainly not saying we should actually ask them. But because they sound so out-there, what do they tell us about the situation today? How far are we from bilingualism being accepted all over the world and being taken into consideration when education and cultural policy decisions are made? What do you think?