Q&A: How to convince the next generation to maintain the family language? 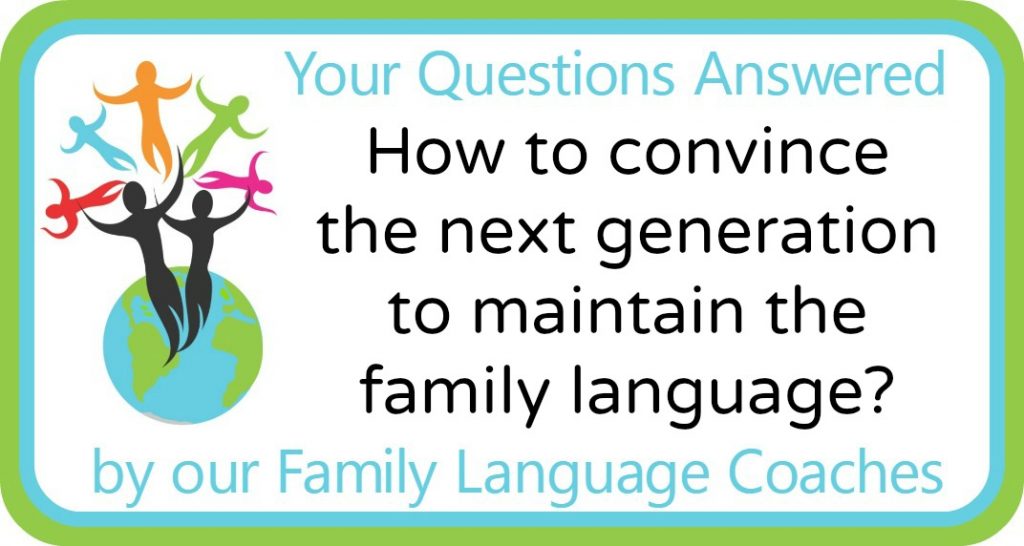 I have a question: I have successfully raised my children to be bilingual (English and Spanish) in the United States and couldn’t be more proud of their fluency in speaking, reading and writing. We spoke it at home and they only use English at school.

However, now that they are all grown up and have children of their own, I can’t be help but disappointed that the language is not being passed down to my grandkids. Even though bilingual, my children and grandchildren speak English with each other. The grandchildren can understand some Spanish since they hear me speaking to my kids in Spanish, so they tend to pick it up, but when I speak to them, they respond in English.

I also get annoyed that my children speak to them in English when I feel everyone should be speaking in Spanish since that’s what we are. I even get annoyed when my son and daughter speak English with each other when they should be speaking Spanish. I addressed this to my own children and they expressed that they feel it’s not that critical to pass on and that it should be a choice if they want to learn the language. I told them it’s part of the culture and the grandkids won’t have no Hispanic identity if they don’t speak it to a native level nor will know the language as it’s the only connector to culture, and they should have done it earlier as it’s too late to learn as adults.

We’ve gotten into arguments about this and my kids always point out that my grandkids are connected to Hispanic culture even though they don’t really speak Spanish through food, holidays, festivals, etc. My daughter says for her, English is more natural for her when communicating with her kids, but she was brought up speaking Spanish and Hispanic is her identity, not American. (I think it’s because they mainly speak English in school, with their friends and Spanish with only us and relatives who don’t know English)

I see their point a little, but I don’t think those will heavily make you understand a culture without the language. I’ve noticed this is a common phenomenon among 2nd and 3rd generation kids in many countries, especially the U.S. who end up not knowing their heritage languages and languages are lost, even though their parents were brought up fully bilingual abroad.

Is there any way to make people who are of our community to speak the language? In the Hispanic community, it’s considered shameful if a Hispanic doesn’t speak Spanish and they are not received well by the community.

Thank you for your question, which is on a topic I am sure many other parents and grandparents have on their mind: will the next generation maintain the family language?

I have to start by saying that I am not able to give you an answer which will magically solve this dilemma for you. I understand your disappointment and feel your frustration. As parents we can try our best to pass on our cultures and languages, but there is only so much we can do, especially so with adult children. At some point we must reassess the situation, make sure we look at things from others’ perspective as well and try to find a positive way forward.

From your message, I can see that the situation has come to a stale mate. After initially stating that you are very proud of your children for having grown up bilingual, you use words such as ‘disappointed’, ‘annoyed’ and ‘arguments’ about the current language situation with your children and grandchildren. These are not the sentiments I would like you to have when you are with your family.

It is true that language is an extremely important part of culture and in many ways a vital part of being able to understand and identify with a culture. A language is often a connection with our roots. I would however not go as far as to say that not knowing the language means that you are cut off from the culture. Through customs, food, art and music, down to clothing and the way you decorate your home – all of this and much, much more is part of one’s identity and culture. Independent of whether your grandchildren are fluent in Spanish or not, they will still have a strong connection to the Hispanic culture. While, at the same time, growing up as part of the American culture.

From what you describe, your children’s dominant language is now English, and this is the language they want to use with their own children. No matter how much you would like to see a change to that, it is your children’s decision to make. While you can express a wish for more Spanish use in their own families and when you are all together, you cannot force them to change this habit.

You can bring this up to discussion but do so in a non-demanding and non-blaming way, and when you are all in a good mood. If tensions arise, back off. Ask for suggestions on how your children think you could all increase the amount of Spanish spoken within the extended family. Explain to them how important this is to you, don’t demand anything, but ask for their help in keeping the language going. You could also show them links to articles describing the huge advantages their children would be set to gain if they were raised bilingual.

Also, continue being the Spanish-speaking role model to your grandchildren. You say that they already understand some of it thanks to you – take that as a positive and build on it. Read Spanish books with them (try to choose ones which showcase the Hispanic culture), discuss the characters and describe the plot in more detail. It does not matter if they don’t understand everything – start with simpler books. Tell them to ask question – and answer in Spanish, even if they speak to you in English. Have patience. Show your excitement when they use, or even try to use, Spanish. Don’t make a big deal about mistakes.

Please try to ignore what the community thinks or says about everyone having to be fluent in Spanish. Don’t take that extra pressure on. This is your family we are talking about and you can lead the way in a positive encouraging way.