Bilingual! Bicultural? Do you know where I am coming from?

by Rita | May 7, 2014 | Bilingualism, Finland, Language and bilingualism, Only happens to a bilingual | 6 comments 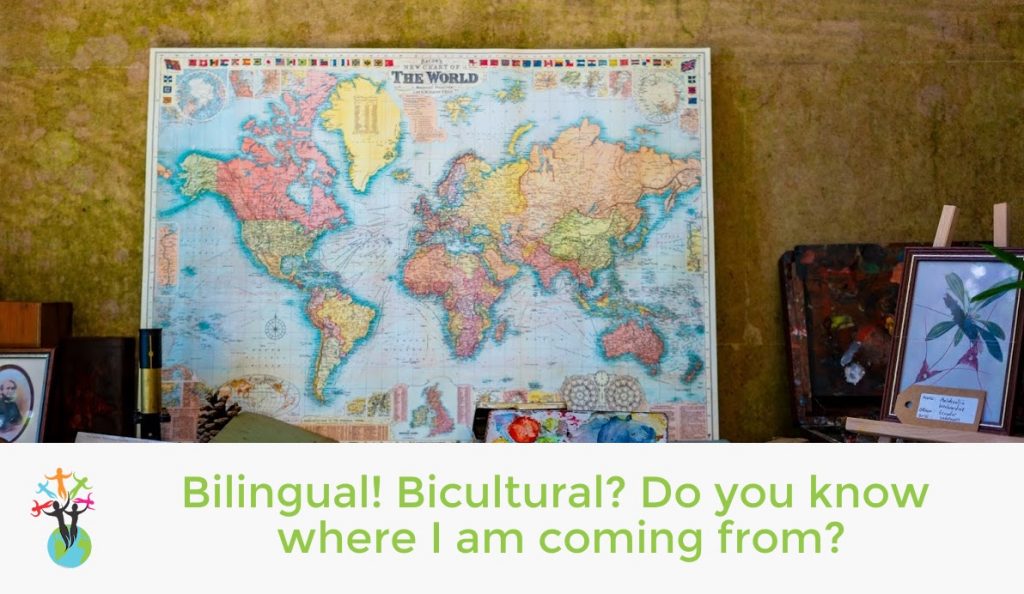 “Where are you from?” that was one of the questions from last week’s post – a question to be mindful of when speaking to a bilingual or bicultural child. Many adult bilinguals have however said to me that they don’t mind being asked where they come from – and I do agree with them. I am comfortable with my identity and actually like answering the question.

The situation is normally that a stranger overhears me speak Swedish with my daughters and the discussion goes something like this:
Stranger: “What language is that? Is it Dutch?”
Me: “No, it’s Swedish.”
Stranger: “Oh, you’re from Sweden!”
Me: “No, from Finland.”
Slightly confused stranger: “Ah, so you’re a Finn.”
Me: “Yes, a Finland-Swede.”
Even more confused stranger: “A what?”

I grew up bilingual in Swedish and Finnish and consider myself bicultural from birth, since we Finland-Swedes have our own traditions, dialects, literature, music and foods. From an outsider’s point of view Finns and Finland-Swedes would probably be considered part of the same culture, though. Who decides where the cultural borders are?

Growing up in Finland I have learnt to appreciate equality, social justice, honesty, trust, practicality and a can-do-attitude. Humility, sometimes bordering on self-depreciation, is also something that I strongly associate with Finland. But are these typical only for Finland?

Studying German as well as working and living in the country gave me an insight into that part of European culture. What influenced me most was probably the German’s love for their great authors and rich literature. Did that make me a bit German?

Marrying into an Indian family made me rethink the concept of family, not to mention extended family. A sister-in-law’s husband’s sister’s children were all of a sudden close relatives. The Asian inherent respect for the elderly also made a big impact on me, as did the joyous celebrations of family occasions. I love Indian food and can make a delicious alloo gobbi sabji and murgh biryani. Has this made me more Indian?

I have now lived in England for 16 years and been married to an Englishman for two, and I know I have been influenced by the English culture. This comes to light especially when I go back to Finland, which I do at least every summer. I find myself getting annoyed by queue-jumping, less than friendly service in shops and restaurants and the general unwillingness to small talk. I don’t drink coffee. Am I still Finnish?

What has impressed me most in England is the open-mindedness and multiculturalism of the country – not forgetting the ability to laugh at yourself. I love English humour! My husband has taught me to love cryptic crosswords, I carry an umbrella with me at all times and I know what the bus driver means when he says “Ey up, mi duck!” – does this make me somewhat English?

Do you know where I am coming from?