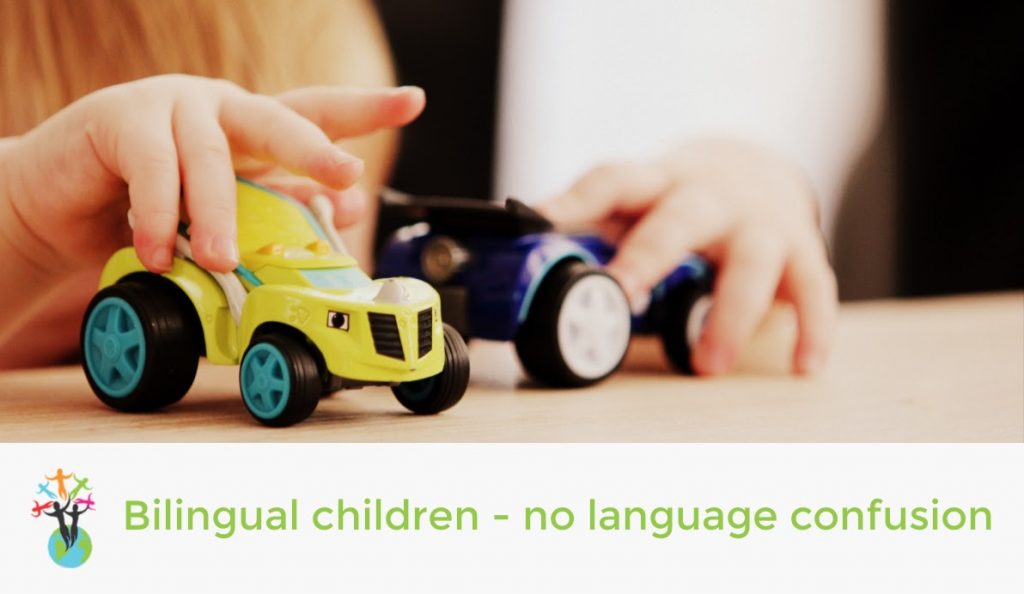 We have answered more than two hundred questions on the topic of raising bilingual children, and the worry that gets mentioned most frequently is whether kids growing up to learn more than one language can get confused by the languages in their family and environment. Again and again we emphasize that this is a myth: bilingual children’s language development may proceed differently than that of monolingual children, but they are not confused!

Will bilingual-to-be children be confused if …

… they learn more than two languages while growing up?

NO.
Children have an amazing ability to pick up several languages while growing up – providing they get enough exposure to them and have the chance and need to interact in them. Millions of children worldwide grow up in truly multilingual environments, learning them as they grow up, and they are no more confused than monolingual children. Bilingual children often mix their languages to start with, but this is just a part of the learning process and does not mean they are confused about their languages.

… they start nursery in a language they do not know?

NO.
When immersed in a language, children learn a language quickly. They will of course go through a phase where they are only listening and taking it all in, but sooner than parents think, they learn to understand and also to speak.

… they learn to read and write in two languages simultaneously?

… the parents speak different languages to them?

… the parents speak a different language between them?

NO.
In many families, parents do not speak each other’s mother tongues and use a third language as their common language, while speaking their respective native languages with the children. This also does not confuse a child – however, the kids do quickly learn to understand a fair deal of it, so don’t think you can keep a secret language forever!

… one parent speaks two different language with them?

NO.
A parent can pass on two languages to a child. It is not an easy task and it requires commitment and discipline, but it can be done. Read how our coach Maria does it in her family.

… a parent mixes the languages spoken to the child?

NO.
Most bilingual people mix their languages when they speak with other people who know the same languages. This is natural bilingual behaviour and is called code-switching. It has its own rules and adds many fascinating nuances to the communication. Children will of course grow up to do this, but since they will also hear the language when it is not mixed, they learn to keep the languages separate and not to mix them when there are monolinguals around.

… a parent switches the language spoken with them?

NO.
There are different scenarios in which a parent might want to switch the language they speak with a child. From my own experience, it is not a straight-forward thing to do, but by working with the child and carefully adapting the process it can be done. A child’s natural instinct is to generally resist change, but making a gradual transition from one language to another does not confuse your child.

… a mother/father does not speak her/his mother tongue with them?

NO.
A parent should speak the language they feel is right – in most cases this is their mother tongue, but not always. Don’t let anyone tell you that the mother tongue is the only right way to go if you have chosen otherwise. Your child will not be confused by your language choice.

… a mother/father speaks a language she/he is not fluent in?

To summarise the answer to whether you will confuse your child with your family’s language choices, I would like to finish with a quote from my younger daughter’s favourite song from when she was nine months old: