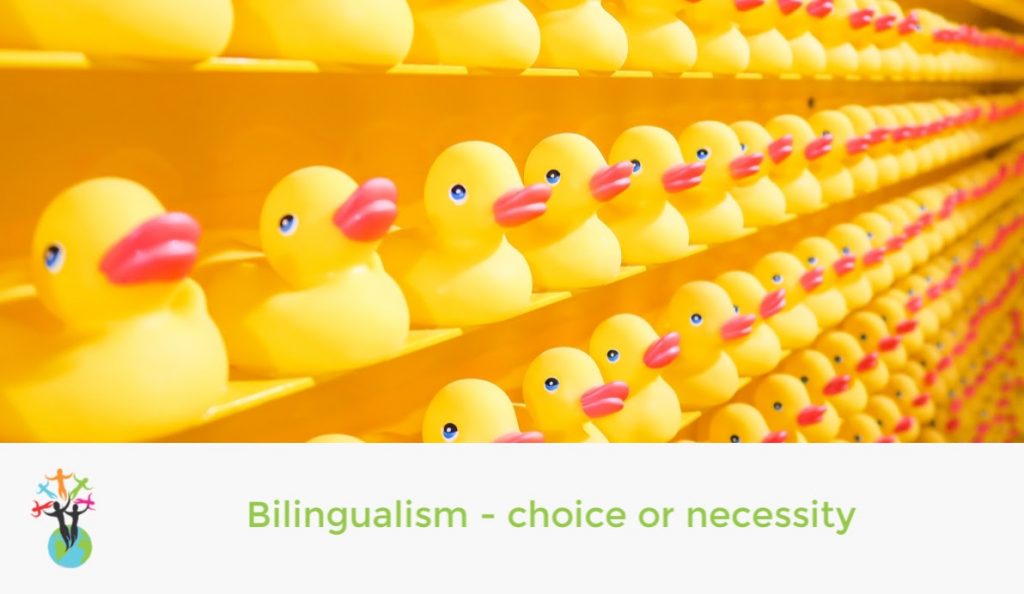 Growing up bilingual is another aspect of my early childhood which was a given for me (last week I wrote about how I took for granted my right to speak my mother tongue at school). I really had no choice, as my mother spoke Finnish with me and my father Swedish. They did not have plan, nor do I think they ever discussed the family language situation, my brother and I just grew up with both languages as a necessity.

Fast forward a couple of decades and my first daughter was born, and she had not only two but four languages to contend with (Punjabi and English was added to the mix). Was it her choice to become bilingual? No, it was not, it was mine and her father’s choice, and for her it became a necessity. If your mum and dad consistently keep on speaking two different languages with you from birth, you will learn them.

Could we have made a different choice?

Her father and I were speaking English with each other when our daughter was born. We could have continued with that and made English our home language and she would have learnt Finnish later, probably at nursery. What would that have meant for her? If we had chosen to both speak only English with our daughter, she would definitely have missed out on learning Punjabi and most likely never learnt Swedish either. She would however still have reaped many of the benefits of being bilingual.

Despite the many known advantages of bilingualism, based on my experience with multilingual families, this is however rarely the main reason parents decide to raise bilingual children. More often than not, it is a practical and also emotional decision.

Does it matter which languages you choose for a bilingual child?

Let’s continue the above scenario – that our daughter would have learnt English and Finnish. How would that have changed her future? As a three-year-old she visited her grandparents in India for the first time and she loved staying with the extended family. How different would that experience have been had she not been able to talk to her grandmother, grandfather, aunties, uncles and cousins? Though small children are very apt at creating relationships across language borders, I am sure that the bond she and her younger sister have been able to establish thanks to their Punjabi-skills is a lot stronger than if they had spoken only English. It is also a bond they have been able to maintain into adulthood.

Bilingualism as a necessary choice

It won’t come as a surprise to you when for me the answer to the language choice question is “Yes, it matters a lot which languages you choose”. My daughters had no choice in the matter when they were blessed with a family where the relatives live literally worlds apart. Since I had the freedom to make that decision on behalf of them, for me this also landed me with the responsibility of making it as easy as possible for them to get to know all sides of their families’ heritage and culture. It is part of their identity. I wanted them to learn the family languages.

Respect for family languages and cultures

Had we selected English above Punjabi and Swedish for our daughters – what signal would that have given? You can of course learn to love a culture without knowing the language, but how would you feel about the language that represents it, if your parents would have chosen not to teach it to you? Would you have an equal amount of respect for the language and culture? Maybe you would, but still, it would not be the same, and I am not sure you could identify with it in nearly the same way.

No one regrets learning a family language

I am happy we made our choices, and although it was not always straight-forward, I know my daughters feel the same. So if you are on the fence whether to keep a family language or not, remember that no one has ever regretted learning a family language.