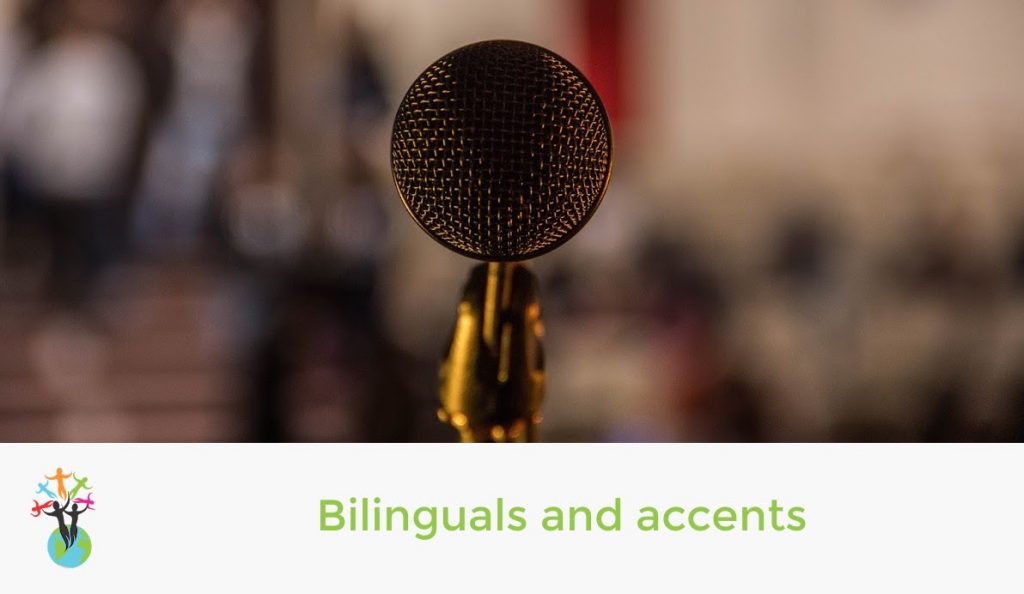 Should you be able to speak a language without an accent to call yourself bilingual? Can you acquire a native-like accent in a language you learn later in life? Do others guess where your accent is from? Does it really matter? Do you care?

I have recently discussed accents with a few different people, some of them bilinguals, others monolinguals and some monolinguals who speak more than one language. A monolingual who knows and uses two languages? Yes, exactly, this is how they have defined themselves. When I asked why they do not say they are bilinguals, the answer was “I am not fluent” or “I have an accent when I speak the other language”.

In my mind, these people definitely are bilinguals: you do not have to be fully fluent, and you certainly do not have to speak your other language(s) accent-free to call yourself a bilingual. I subscribe to Professor Grosjean’s definition which is “Bilinguals are those who use two or more languages (or dialects) in their everyday lives” – which makes no mention of full fluency nor accent.

On average, children who acquire a language before the age of about seven end up speaking the language with a native-like accent. If you learn a language after this age, it depends very much on how much time you spend in the particular environment and on your own ability to pick up the language specific sounds that make you sound like a native speaker. Individuals are different, and some people have an excellent skill in quickly picking up accents, while others struggle more. It is definitely possible to achieve a native-like accent later in life, but you would probably need a voice coach and definitely a lot of commitment and time to get there.

For me it is an admirable goal to learn a language that well that a native will think that you are also a native speaker of the language, and I take my virtual hat off for anyone who does, or even attempts it. Some people may also need this for their job or for some other specific reason, such as the wish to fully blend in the community they live in. All very valid reasons!

If the definition of a bilingual were to include ‘accent-free’ I would probably have to reclassify myself as a monolingual – I definitely have an accent in most languages I speak, in some of the languages the accent might be only noticeable to native speakers, but in others – like my spoken English – it is instantly recognisable. The accents are part of my bilingual identity, and I am fine with this. It also does not annoy me when others ask where I come from – many a discussion has evolved from the neutral start of “Lovely weather today” to something much more interesting once the other person notices my accent and wants to know where it comes from. I found it hilarious when a delivery man once asked me to repeat my name just because he wanted to hear it again in my accent – not because he did not understand it 🙂 If you are an adult bilingual, would you rather people not asked where your accent is from? Do you mind the question?

I find it actually quite funny when people start guessing where my accent is from, especially when the discussion is over the phone and the other person does not see me. ‘Dutch’ is probably the incorrect guess I have heard the most, others are ‘German’ and the more or less correct ‘Scandinavian’ – ‘South African’ was a surprise to me first time I heard it, but it makes sense with the close connection to ‘Dutch’. Though I do not mind people noticing my accent as not being a native one, I do remember once feeling quite proud to be asked about it: I had been studying in Germany for about six months and someone wanted to know which part of northern Germany I came from. Once I was mightily impressed by someone from the US, who I spoke to for the very first time, and he guessed my place of birth within a 100 km radius! Turns out he had spent two years in the neighbouring town – the world is small.

Whatever your attitude to your own or someone else’s accent is, I think the following quote is one that everyone should keep in mind:

“Show respect to those who speak with an accent, they probably know one more language than you do!”