Bilinguals have a sharper focus 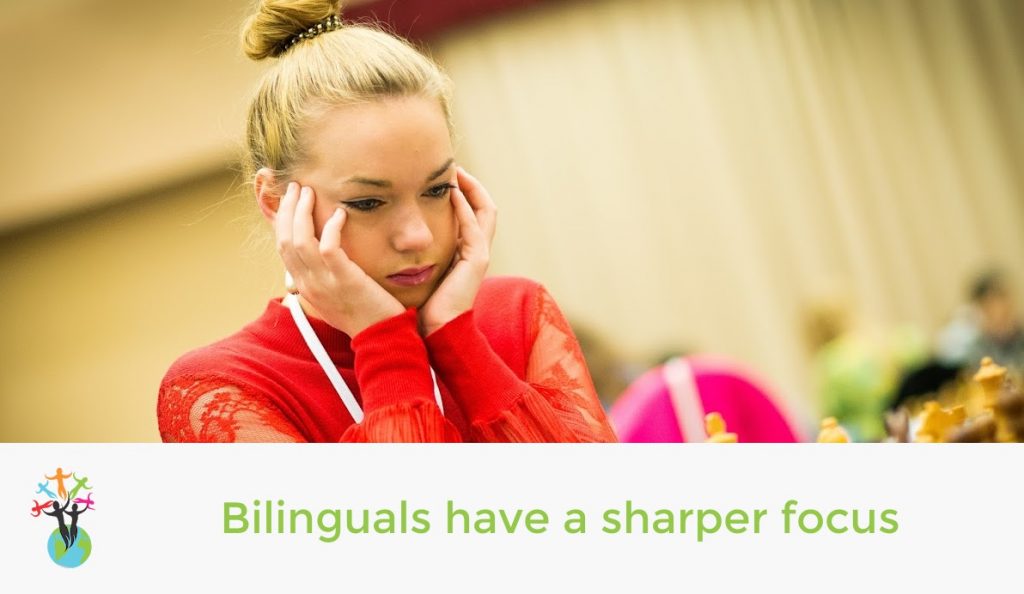 No, I am not saying that you can see better if you speak more than one language – there are many advantages to being bilingual, however a better eye sight is sadly not one of them. What I am saying though, is that bilinguals can on average concentrate better than monolinguals.

The Canadian neuroscientist Ellen Bialystok has done extensive research into bilingualism and one of the results has been that if you use more than one language in your everyday life, you get better at focusing on tasks that require you to concentrate on something essential and disregard what is irrelevant.

This is apparently due to the fact that when a bilingual starts speaking, all of the brain areas where our knowledge of language is stored get activated. Each of the languages we know is partly stored in different areas of the brain. Which one of them gets used is decided by the so called executive control centre – bear with me here, I know it’s a bit technical, but worth knowing. In bilinguals the executive control area is on average more developed than in monolinguals, due to it being in constant use. Just like any other muscle, it gets better trough exercise.

The executive control centre is, amongst others, also in charge of decisions to do with focusing, giving bilinguals an advantage in such tasks. Bialystok conducted a test with bilingual and monolingual Alzheimer’s disease patients who, based on their ability to function, were at the same stage of the illness. MRI scans however showed that in the bilinguals the disease had already progressed much further, they were just able to function better for longer than monolinguals. Similar results were found with other dementia patients. There are of course other ways of exercising your brain to reach the same benefit, but with bilinguals this just happens automatically.

In another test bilingual and monolingual participants were put in driving simulators, where they had to steer through traffic while performing tasks given to them through headphones. Bilinguals were clearly less distracted than the monolinguals in this group. Bialystok puts this also down to the more developed executive control centre. – I wouldn’t recommend using that as an excuse to fiddle with your mobile while driving though!

Joking aside, think about it, by putting the little extra effort in when your children are small and making sure that your offsprings learn the family’s languages, you might be positively influencing their lives in years to come – a true gift of a life time, in more ways than one.

May the peace and power be with you!