Can monolingualism make you ill?

Can monolingualism make you ill? 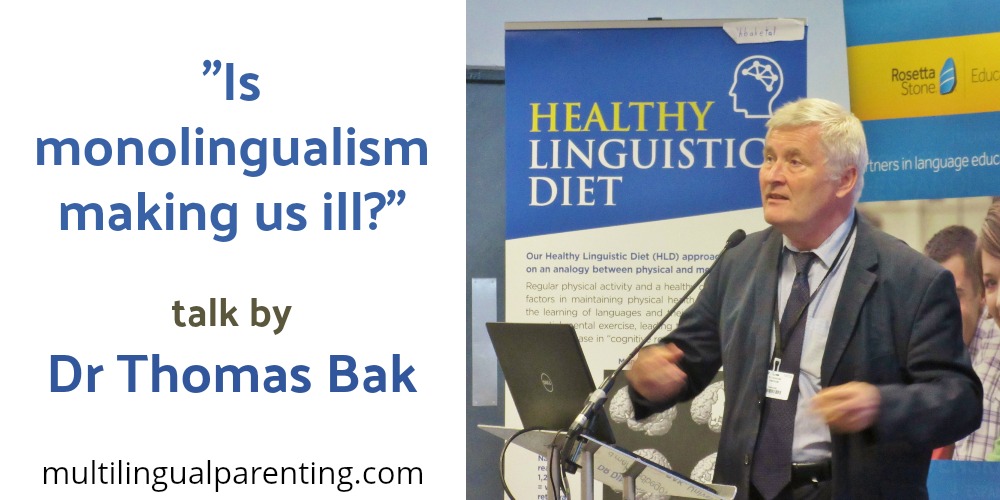 “Is monolingualism making us ill?” was the somewhat provocative title of an excellent talk by Dr Thomas Bak, neuroscientist and dementia researcher at the University of Edinburgh, which I was fortunate to listen to last week. Alongside many other language enthusiasts from different organisations: schools, universities, businesses, charities and the government, I was invited to the “Speaking to a Global Future” symposium organised by Speak to the Future at the Language Show in London. We were treated to a full day of interesting presentations, and in this post, I focus on the talk held by Dr Bak about the potential positive health benefits of bilingualism.

According to Dr Bak, for decades, researches have been spending huge amounts of money on finding a cure for dementia, without any significant success. Dr Bak’s suggestion is that instead of looking for a cure, “we should use at least some of the money on finding ways to minimise the risk factors and maximise the protective ones”. Here is where multilingualism enters the stage.

By using several languages, you build up a cognitive reserve which makes your brain more resilient. Actively “speaking more than one language does not prevent you from getting dementia,”  but it allows you to “function longer” than a monolingual person with the same level of brain damage, Dr Bak explained. Switching between your languages and fending off the languages you do not need in a certain situation is an effective mental exercise, which trains the executive control area of your brain.

Dr Bak went on to quote several different research findings which have all found similar encouraging effects. He however also mentioned, that there are studies, which have not come to the same conclusion, and which question whether multilingualism makes people healthy or whether healthy people are more likely to learn more languages. It will be a while before we get certainty about this, but Dr Bak’s most recent study is taking steps toward it. 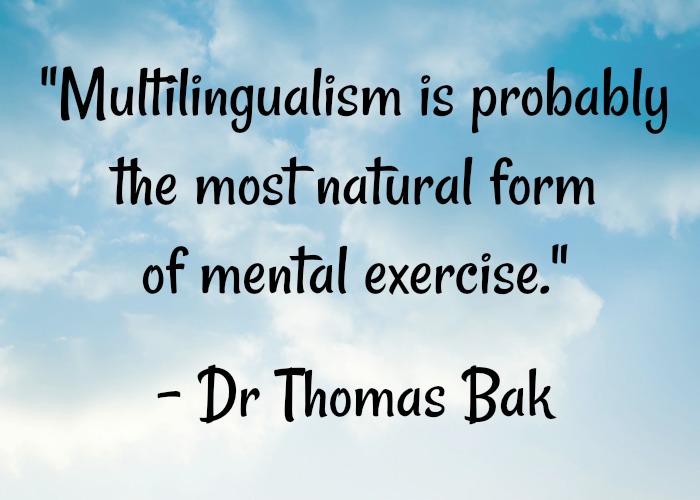 In their research, Dr Bak and his colleagues studied 608 monolingual and bilingual stroke sufferers and how well they recover after a stroke. Their findings are rather astounding. A bilingual person is equally likely as a monolingual to be affected by aphasia (some degree of language disorder) after a stroke. However, bilinguals are 20% less likely to suffer from global aphasia (when you only have minimal language functions). According to Dr Bak’s research, while 20% of the monolinguals regained normal brain functions after their stroke, this number doubled to 40% for bilinguals. Bilinguals were also 20% less likely to have subsequent vascular dementia after a stroke.

Those are significant figures, and they should make any decision maker stand up and take notice. Taking into account how much money goes into dementia and stroke care every year, supporting multingualism and language learning should be a priority for every government across the globe!

Using his own 3-year-old daughter as an example, Dr Bak, went on to describe children’s amazing abilities to learn languages. “Kids are extremely good at telling languages apart,” Dr Bak said and continued that “the idea that children get confused is completely unrealistic”.

Bilingual children gain and amazing level of metalinguistic awareness at an early age, and they know which language to speak when and with whom. This also teaches them to take other people’s knowledge and point of view into consideration when communicating. 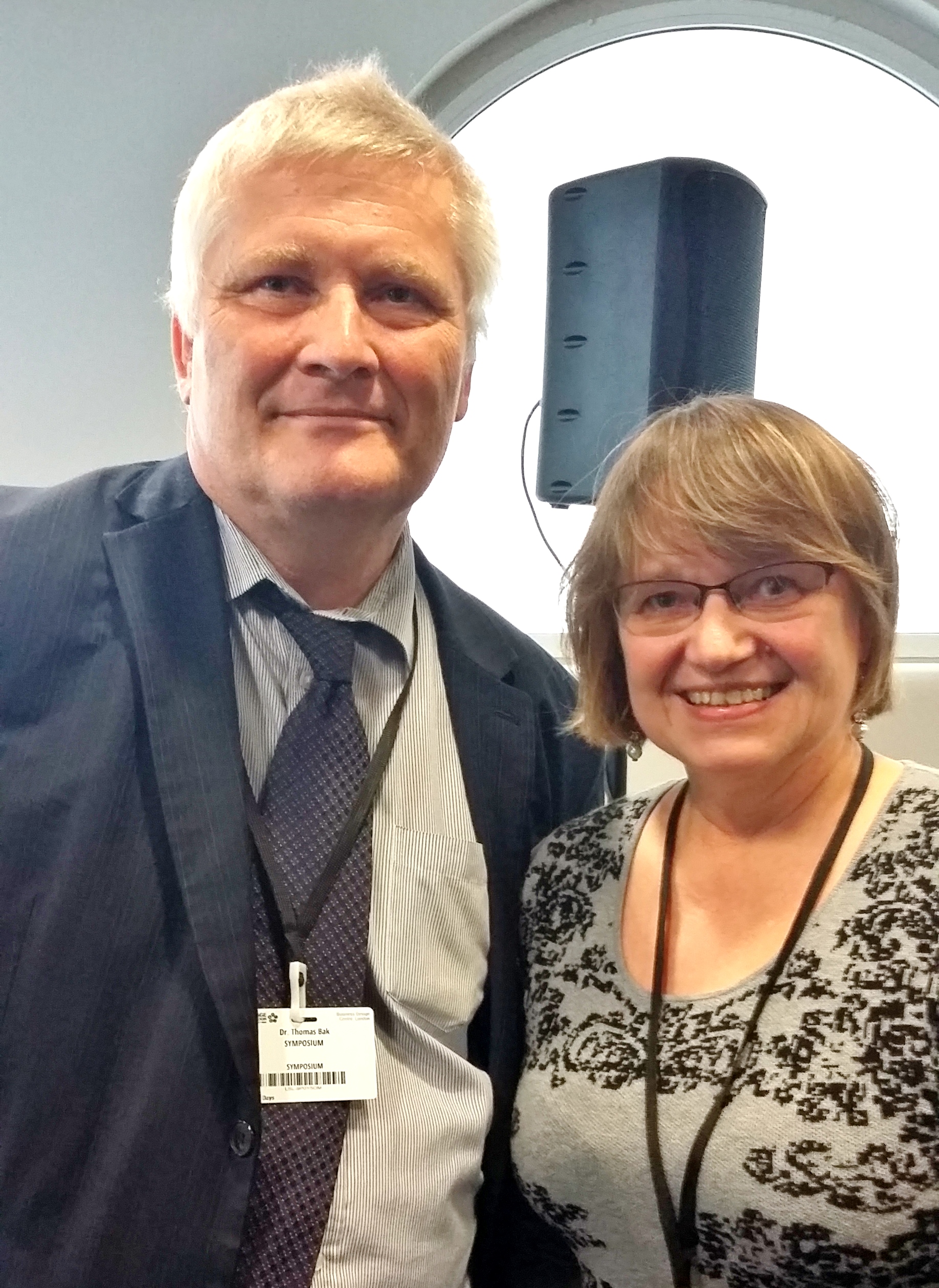 Dr Thomas Bak and yours truly – you can see how excited I was to meet him!

“It is never too late to learn a new language,” Dr Bak said and used the writer, poet and translator Mary Hobson as an example. She started learning Russian at the age of 56 and is today, at the age of 91, one of the most respected Russian translators in the UK.

“Multilingualism is probably the most natural form of mental exercise,” Dr Bak pointed out. “It is however important to continue speaking your languages,” he continued, as the positive effects of bilingualism on the brain will wear off if you drop your other languages and start speaking only one. “It is about usage, not about abstract knowledge,” Dr Bak explained and reminded everyone that “practice is much more important than perfection”

What about those, especially in the English-speaking world, who claim that it is unnecessary to learn any other languages because “everybody speaks English” (not true, as we all know). According to Dr Bak, “the convenience of not having to learn other languages means that you rob yourself of one of the best ways of having mental exercise”!

Does monolingualism make you ill? No, not as such, but it may make you less healthy.