I had the right to use my mother tongue at school 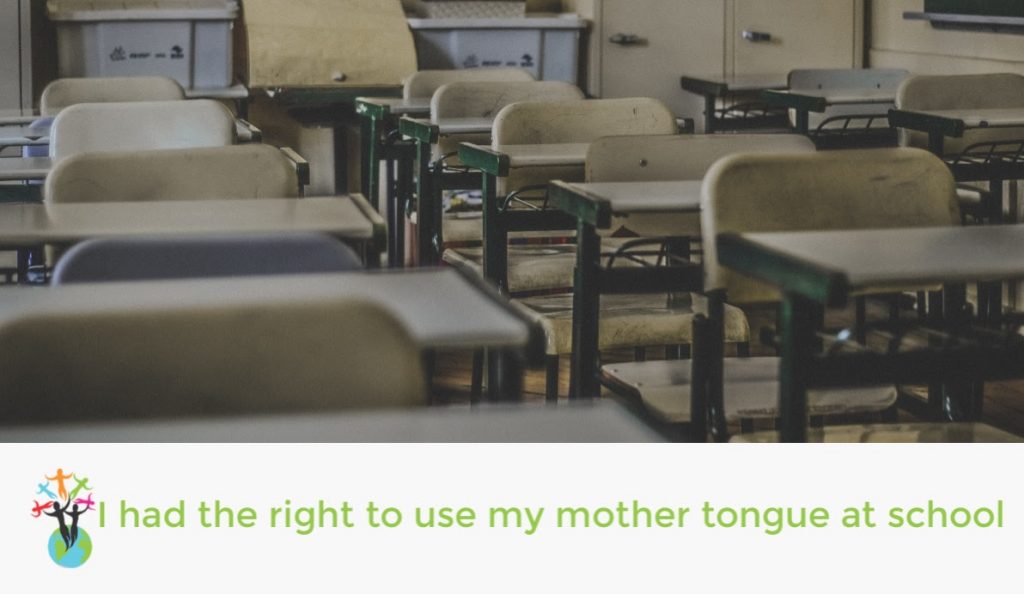 A bit of an obvious statement, you may think. Unfortunately, it is not. Instead, it is a problem many children in the developing world still face: not being able to attend school in their mother tongue.

United Nation’s International Mother Language Day is celebrated on Sunday the 21st of February and this year’s theme emphasises children’s right to schooling in their mother tongue. Children should have the right to an early education a language they know.

UNESCO wants to emphasise the “importance of appropriate languages of instruction, usually mother tongues, in early years of schooling: formal and non-formal education must deliver quality education for all learners by taking a multilingual approach”.

Attending school in a language I knew was something I took for granted when I was small. The realisation that just like running water and roof over my head, this is by far not the standard for many children, makes me truly appreciate what I had. I was born into a bilingual family with a Finnish-speaking mother and a Swedish-speaking father, and – because both of the languages have an official status in Finland – schooling was available in both. Which one is my mother tongue? – well, that is good question and you can read my further musings in this post.

Not only was I allowed to start my education in a language familiar to me, I had the luxury of choice. And I actually made use of this option: the first two years I went to school in Swedish, then, as an 8-year-old, I switched to a Finnish school for a year. I suppose that does show that I was comfortable in both languages at that age and that my parents had succeeded in a fairly balanced bilingual upbringing. Well done, mum and dad! (and thank you for letting me decide which school to go to)

What if I would have had to go to school in English, a language that neither of my parents knew? What if that had been the only option for me? Would I have proceeded with the same confidence? Not only is it important to give all children access to schooling, but to do it in a language they know and can express themselves in.

Actually, multilingual education is something that every country should consider. Far too many children finish school having studied languages, but unable to express themselves in them, as they have not been able to practice their languages enough. I hope that schools all over the world will become more open-minded to the concept of multiple languages in teaching, and I do think schools in areas where many languages are spoken should be showing the way. Let’s make multilingual schools the standard, not the exception!