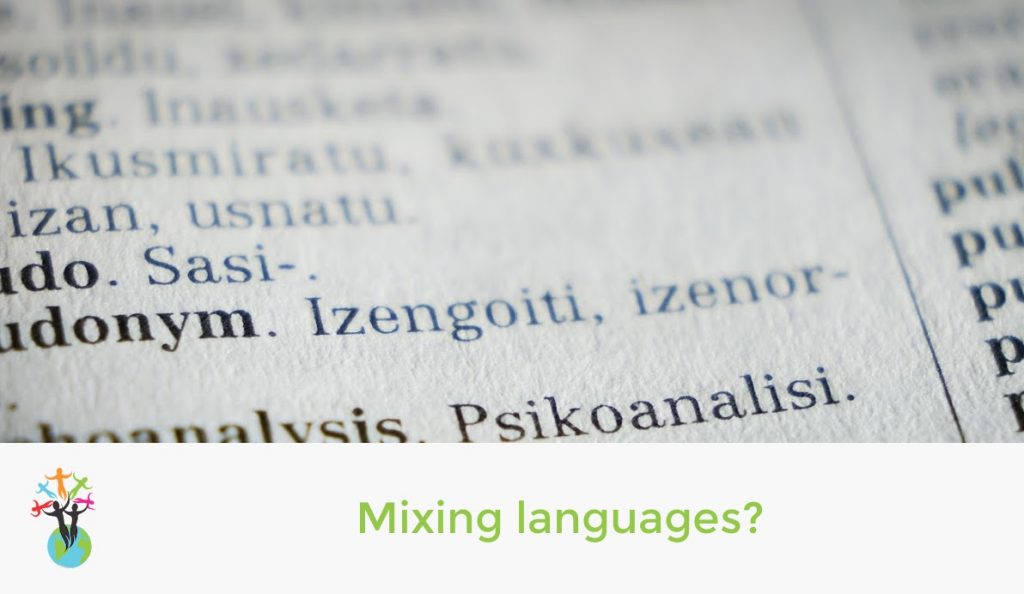 If you are a bilingual like me, you know that we all do it – we mix our languages in our everyday lives. When we can’t think of a good word in one language we simply pick one from the other. Sloppy, lazy talk? Actually not, it is called code-switching and it has been researched quite a lot in recent years.

Turns out what I have considered to be “jumble talk” isn’t that random at all. Mixing your languages, (I shall from now on call it code-switching) has its own set of intricate rules. As an adult bilingual, you wouldn’t code-switch with someone who won’t understand the word or phrase you are borrowing from the other language. You also keep the grammatical structure of the language. (Code-switching should not be confused with variants of languages which consistently use certain words or phrases from another language, such as the Swedish with Finnish words and phrases spoken in the Helsinki area.)

Small bilingual children code-switch quite frequently. If they do not yet have the awareness about who understands what, they might also do it for example with a grandparent who doesn’t know the borrowed word. Although this might be a bit confusing, it is not something parents need to worry about, and certainly not a reason for giving up on raising a child to be bilingual. The way to react to it, if you really do not understand what the child is trying to tell you, is to ask “How would mummy/daddy say that?” – not prompting for the specific word, but asking for the meaning. The answer might be a somewhat longwinded explanation, but you will get one.

Children pick up very quickly what language to speak with whom, and soon they will stop dropping in words from the “wrong” language. Small children’s code-switching is the norm, not the exception. Think about it: all children sometimes struggle to find the right word, even if they speak only one language. Bilingual children just have the advantage of another set of words to pick from – why not use it?

That’s good news, isn’t it? We’re not mixing languages at all, we’re sophisticated code-switchers! Though I am not so sure I can (or even should) give up on my habit of offering the right words when there are too many switches in a sentence…

May the peace and power be with you!