Multilingual Family with English and French in Spain

by Rita | Jun 1, 2016 | Being the parent in a multilingual family, Families across he world, Language development | 0 comments

Today I have the pleasure to introduce you to another lovely multilingual family! Mum Bernadette, dad Sam and their 18-month-old daughter Lily live in Barcelona in Spain. Bernadette was born in France to British parents, Sam is British and their daughter is growing up also learning Catalan and Spanish. Mum Bernadette has kindly answered my questions.

Family languages:
English and French at home
Catalan and Spanish are spoken in the community.

You can contact Bernadette via email: b_demornay yahoo fr 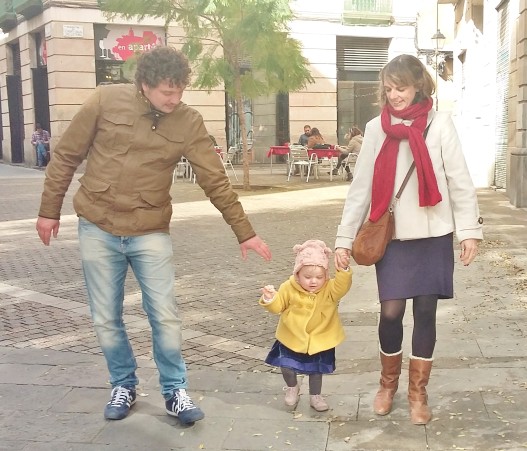 Tell us about your family and where you live!

We have been living in Barcelona for eight years. I moved here from Paris, where I was born and brought up by English parents; I have dual French-British nationality. I was therefore brought up bilingual until the age of six (English at home, French at nursery and school), when we moved to Spain for five years. I attended a regular Spanish school, and with total immersion I was speaking Spanish fluently within 3 months. I am now perfectly trilingual. My partner, Sam, moved here from England, the Midlands where he was brought up in an English family. Our daughter, Lily, is 18 months old and was born in Barcelona.

What is your family language strategy – who speaks what language with whom? If you have a strategy, why did you choose it?

Sam and I speak English to each other and always have done. Lily goes to a Catalan nursery, where they mostly speak Catalan but also some Spanish. At home, I speak French to her and her father speaks English to her. We follow the one language, one person strategy; I exclusively speak French to her and Sam only ever speaks English to her. We chose this strategy as it worked really well for me when I was a child and, in my opinion, makes the most sense.

Why did you decide to raise your children to become bilingual?

We had no choice! Speaking Spanish or Catalan was not an option for us with Lily, we wouldn’t have felt comfortable; I believe you should speak to your child in a language you have emotional ties with and feel comfortable in, a language in which you are totally yourself.

What do you think is the biggest advantage your children have of being bilingual?

Being trilingual has been so amazing for me. Obviously, it has made finding a job and travelling easier; but more importantly it’s enriched my life socially and culturally, like being able to read the literature by many authors in the original language or understanding and being part of family life in three different countries and cultures. I honestly feel multicultural and I hope Lily will have that too. I don’t feel like I have a split personality as many people ask me, I have three cultures.

What has been your biggest challenge when raising a bilingual kid?  Has everything gone as planned?

Speaking French with Lily was hard the for the first few weeks as I speak English with Sam, but then it just became automatic and it would now feel strange to speak anything other than French to her! I also feel that not mixing languages is vital so that the child can make the difference successfully between the two ‘codes’. It’s sometimes difficult not to mix, when family are present for example, but I never speak English to her, at least at this age.

Anything you would do differently at this stage?

No! Lily is saying lots of words and two/three-word chunks in both English and French. She happily says ‘Hola!’ to passers by and is starting to sing a couple of songs, so her language development seems to be going okay! 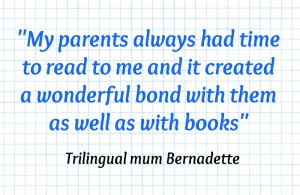 What are your family’s plans for the future with regards to languages?

Lily will be learning four languages from the start: French and English at home, Spanish and Catalan at school. We’re just hoping it will work out! My biggest worry is French, as it will be the minority language (only I speak French to her). Spanish also worries me as primary school is mainly taught in Catalan here, but hopefully with books, songs, TV and friends it will be all right.

What is your best advice to other multilingual families raising bilingual children?

I can’t stress enough the importance of reading for children’s language. I know from experience that a huge part of one’s vocabulary comes from reading; my English was always good and I truly believe it’s because I read a lot. My mother was marvelous at making me want to read books, she was so enthusiastic I couldn’t resist reading the books I’d been given. My parents always had time to read to me and it created a wonderful bond with them as well as with books. My biggest advice would be to really invest time and energy into reading with your child. Also invest in audiobooks in both languages so that your child can listen to stories on their own.

Thank you, Bernadette, for introducing you to your lovely family. Your daughter Lily is a true polyglot-to-be!