by Rita | Apr 27, 2016 | Bilingualism, Language, Language and bilingualism, Only happens to a bilingual, Recommended reading | 0 comments

The interview lasts about 1 hour and 20 minutes, and you can find an outline of it below, so you can easily jump to a topic that is especially interesting for you, if you wish. I do, however, recommend that you listen to the whole video, it is definitely worth it! Where relevant, I have also linked to my own post on the topic at hand.

02:55 Prof Grosjean speaks about his youth, living in the UK, France and the U.S. How he is a mosaic of cultures.

04:13 When did he become bilingual? – Did you know he was not a child bilingual? And did you know his mother actually kidnapped him and moved him to an English-speaking school?!

05:08 Prof Grosjean tells us about his own family’s bilingualism and how they started off wrongly with their own children. There is a very comforting message to you if you feel it might be too late to pass on your language to your child!

06:36 Prof Grosjean answers the question whether his language skills helped him become a researcher and author.

07:34 He emphasises that to try to understand bilingualism, you have to also read the research about it. Being bilingual does not make you an expert on bilingualism.

08:23 Prof Grosjean speaks about his books “Bilingual – Life and Reality” (English) and “Parler Plusieurs Langues: Le Monde de Bilingues. (French) and describes how his wish to write books about bilingualism for the general public became reality, both in English and French. Swiss chocolate and senior citizens have played an important role! 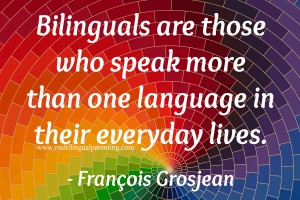 12:06 “Who is bilingual?” Prof Grosjean’s definition: ‘Those who regularly use two or more languages in their everyday lives’, and explains his thinking behind this. You don’t have to be fully fluent, speak without an accent nor have to have learnt your languages at an early age.

13:20 Why is the monolingual view on bilingualism still so pervasive? Bilinguals are not two monolinguals in one, but communicators in their own right and should not be measured by monolingual yardsticks.

15:54 The complementarity principle (first characteristic of bilingualism). Bilinguals use their languages in different domains of life and have a varying fluency in them. Their language dominance changes throughout their lives. Why bilingual children do not develop equal vocabularies in all their languages.

18:38 Language mode (second characteristic of bilingualism). Bilingual vs monolingual mode. Language choice – should another language be brought in or not? Code-switching and borrowing. Continuum of choice between the different modes during communication. In the bilingual mode, bilingual people can use the full extent of their languages to communicate, interact, read and write.

21:30 Prof Grosjean answers the question whether parents should worry about their children being bilingual and bicultural and how biculturalism differs from bilingualism.

23:46 Biculturalism and identity. Which culture do bilingual people identify with? Accept that you are a combination of several cultures. Parents, educators and scientist should do their best to help young people understand and accept being bicultural. It is fine to be a mosaic of one’s cultures!

26:00 The role of the family and the school in the life of bilingual children. Prof Grosjean recommends having a plan for when children should acquire their languages. Which strategy should a family choose? Each family should decide on the best approach for them.

27:35 The NEED to speak a language (third characteristic of bilingualism). Children are pragmatic, if they don’t need to speak a language, they will not do it. He explains how he and his wife created the need for their son to speak French.

28:55 Parents need support when passing on a language. It is hard if you have to do it all on your own. Plan ahead to find the support and read up about bilingualism. 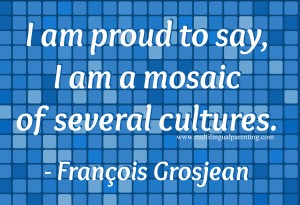 30:52 The advantages and disadvantages of bilingualism. Will all bilingual children be geniuses?
Benefits: cognitive advantages, communicate with more people, open-mindedness, job opportunities etc.
Disadvantages: communicating in the weaker language in a language domain you are not familiar with; mixing languages when tired or otherwise affected; adjusting to cultures and being accepted for who you are.

35:10 How schools can help children be bilingual. Bilingual children are a country’s natural language resource and should be supported. The importance of maintaining children’s languages in monolingual schools. Prof Grosjean is a strong proponent of dual language schools, at any level and in any form.

43:09 Current project: The story of his parents who he never knew – his French father who was a fighter pilot and a double agent in WWII and his English mother who was also an agent!
UPDATE Prof Grosjean’s book about his parents is now available in French: A la recherche de Roger et Sallie, and an English translation is in the making.

45:30 He answers the question whether he has ever regretted being bilingual, and emphasises the importance of supporting bilingual and bicultural kids to understand who they are.

In the Q&A session Prof Grosjean answers the following questions:

47:51 Q&A – To achieve the benefit of being able to multitask should bilingual children’s parents stick to the OPOL strategy?

50:58 Q&A – Do you notice your personality changing when you speak different languages?

56:04 Q&A – What to do when a speech therapist discourages bilingualism?

01:00:15 Q&A – How can educators help children and parents relieve the pressure of testing while still supporting the children’s languages?

01:06:23 Q&A – Opinion on parents who want their children to learn several foreign languages at an early age?

01:14:02 Q&A – How does neuroscience support the findings of bilingualism?