Q&A: How to combine OPOL and the needs of an extended multilingual family? 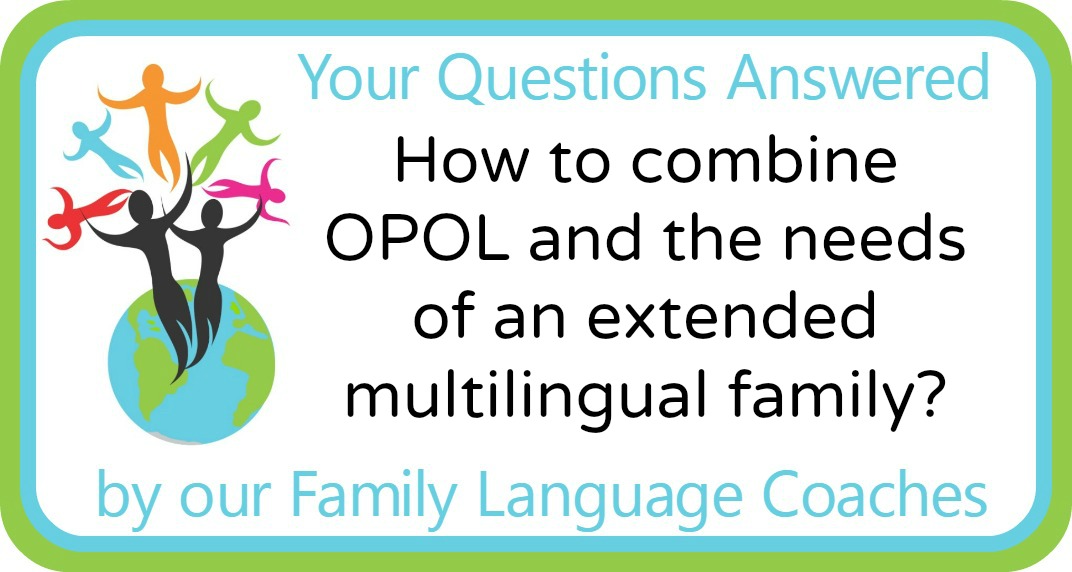 I’m very glad I found the article about the 2 parents, 2 languages (2P2L) family language strategy as it touches on some questions that have been bugging me ever since my daughter (18mths) was born.

My husband (Spanish) and I (bilingual English/German) live in Brussels and so far, we’ve been using a fairly strict OPOL system with me speaking English to my daughter and my parents speaking German. She attends a French nursery five days a week. So far it has led to uncomfortable feelings: me for deliberately not speaking my emotional native language and my parents for speaking German in the presence of my husband and therefore feeling that they are excluding him from the conversation.

When we sit down at the dinner table it’s difficult to figure out which language to speak to whom and can mean that I have to switch a lot. All this has led me to question the OPOL dogma and consider speaking to my daughter in German some of the time. At some point I felt so conflicted about it that I could barely talk to my daughter at all! German is after all the language I speak with both my parents so it would be an important tool in fostering a relationship with my parents.

To add to our complications, my husband himself is bilingual (Spanish Basque) having learned Basque from nursery age all the way up to university level (though nobody in his family speaks it). I think that it’s easy enough to justify not passing on the language since it isn’t spoken in the family or community (though I know that for my husband it has some cultural significance). However, he feels relatively at peace with this decision though it’s a bit strange when we meet up with friends who choose to speak Basque (not Spanish) to their children.

I’m not desperate for her to learn all the languages at once but I’d like my parents to be able to babysit and speak to her in German without having to worry too much. One thing I’m considering is enrolling my daughter in a bilingual school and choosing German as her second language.

I myself have very good German comprehension but feel rusty when I speak it because my professional and social life is entirely centred around English. I have tried speaking to my daughter in German when it’s just the two of us or when there are other German speakers around. It felt a bit artificial so I’m still not sure if this is going to be the right approach.

My friends in Brussels are all English-speaking and we don’t see my parents often enough to give her enough exposure. I don’t want my daughter to associate German only with my parents as the generational divide may make her reject the language altogether.

A final, minor layer of complexity is my own “failed bilingual” background. My parents tried OPOL (German – Bengali) for about a year or two and gave up in favour of just German, which was at the time the community language as well. I became fluent in German, acquired passive knowledge of Bengali and later became fluent in English, when I moved to the UK aged 12 (having previously had some exposure in India and through books). I think that I never learned Bengali very well because my exposure was limited to just one setting (our trips to Bangladesh).
All this makes it very hard to actively “suppress” part of my daughter’s linguistic heritage but at the same time I also want to be practical and realistic!

It would be great to hear any ideas you might have to help make things a bit easier at the dinner table, especially when my German parents come to visit. I sometimes drive myself crazy switching languages: English (with my daughter), Spanish (with my husband) German (with my parents).

Any help or advice would be much appreciated!
Latifa

Thank you for your question and the insight into your wonderfully multilingual family life!

Your daughter is currently learning Spanish from her father, English from you and French at the nursery. In addition, she is getting exposed to German from your parents. As you live in Brussels, Dutch will at some point also become one of her languages, even though most of your friends speak English. I applaud your wish to be practical and realistic – as these two requirements are always the most important ones for success!

Your main concerns are about your daughter’s German exposure and the choice of languages: which one(s) you should speak when addressing her directly and when you are together as a family. I will pick up on the different challenges that you mention in your question, one at a time.

I understand that it is important to you that your daughter learns German, as it the language you learnt as a child and the language your parents speak. I also see that it is tricky situation for you: on one hand you would like to speak your “first emotional native language” (German) with her, but on the other hand feel a bit rusty and artificial when you do try to do it. You also mention that you felt so conflicted that you found it difficult to talk at all.

It is very important that you feel comfortable about communicating with your daughter. The choice of language should never become an issue that stops the communication or affects the relationship between a parent and a child. If you feel that you speaking German with her does not suit you, then please accept this and do not feel bad about it.

There are other ways she can get enough German exposure to learn the language – enrolling her in a bilingual school with German as one of the languages would be an excellent way of ensuring this. I don’t know what the options for a German-speaking nursery place are, but I presume there is a reason for your choice to put her in a French nursery.

As an alternative to talking German with her, what may feel more natural for you is to bring in German through songs and rhymes. An excellent way is to introduce a German-speaking hand puppet or toy! Children fully accept that a doll or a teddy only speaks a certain language, which in this case is the language of Oma and Opa.

When it comes to your parents speaking German in the presence of your husband and feeling that they exclude him from the conversation, I would discuss this as a family. How does your husband really feel about this? I am not convinced at all that he would mind them speaking German – as a bilingual himself, I would expect him to understand the importance of his daughter bonding with her grandparents in their language. Once you have discussed this, first with your husband and then with your parents, I am sure you can come to a solution that suits you all – e.g. that your husband will ask if there is anything he feels that he is missing out on.

In a multilingual family like yours, the dinner table discussions are inevitably going to contain a lot of language-switching – with you as the main switcher. If you were to introduce at least some German into your daily routine, it would feel a lot more natural to speak German to her in these situations (with an English translation when necessary). I know it can at times feel quite exhausting to try to cater to everyone’s languages, but having been there myself on several occasions, there is usually a way to be found so no one feels left out. I would recommend that you also discuss this topic openly between all of you – to find what best suits your core and extended family.

As you notice, I am also not a believer in what you call the “OPOL dogma” – and have in an earlier article written about consistency when using OPOL. Every family’s dynamic is different, and families have varying expectations and goals. OPOL (one parent, one language) is a great family language strategy, but if it does not fit the bill, then it should be adapted.

If you feel okay with it, do introduce some German with your daughter. You do however not have to make it an either or situation – try out different ways to speak (or sing or read) German. This way she would be used to hearing it when your parents come around, even if she wouldn’t be able to speak it yet. You are lucky to have the advantage of being able to choose a bilingual school for her in the future, which will bring her German-skills up to speed very quickly.