Q&A: How to get the minority languages of the family back on track?

by Rita Rosenback | Nov 10, 2016 | Coaches, Grandparents, Q&A Being the parent in a multilingual family, Q&A How to motivate a bilingual / multilingual child to speak a family language, Rita R, Siblings | 0 comments 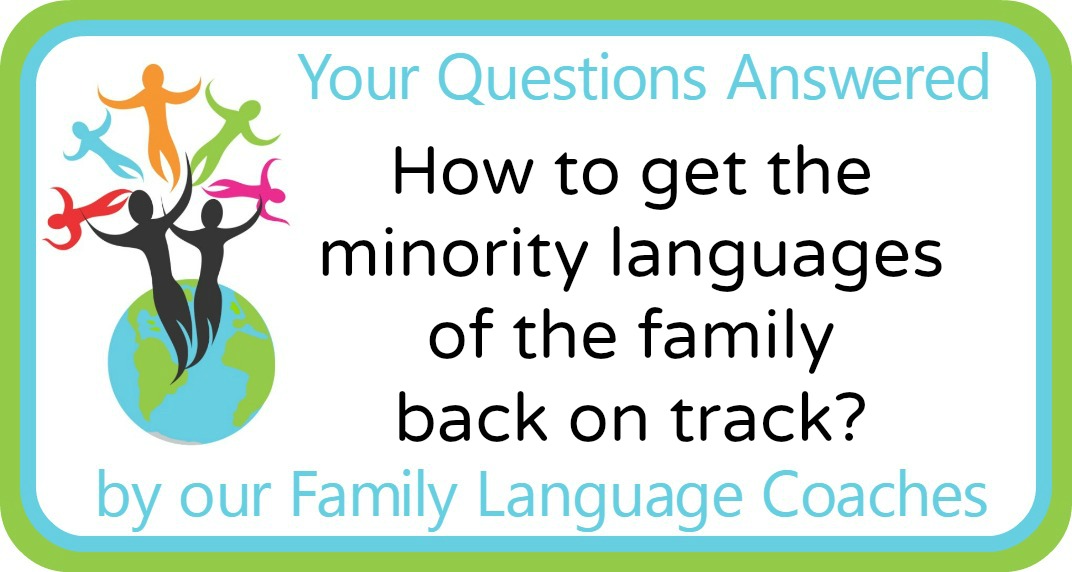 Could you help me with advice on an upcoming dilemma? We’re a family with three languages in the house but every family member’s ability and willingness to speak them vary greatly.

Dad is Spanish, is fluent in English and understands some German. Mum is fluent in German and English and speaks Spanish well enough. The oldest is ten and understands most things in all languages (in a domestic context) but only speaks English willingly. The younger one is six and not happy to be addressed in German and doesn’t always understand dad in Spanish. He’s been actively rejecting anything but English from as soon as he could voice his preference.

I had always hoped for more – we do feel bad about having always been sucked back into the majority language, living in England, and think we have spoilt our children’s potential. We feel more confident speaking all three languages with our eldest than our younger son, so our approaches with them vary already.

Now our third is about to come along any day now and we’re resolved to ‘get it right’ for this one. This will introduce a third child-specific approach to our set-up. I’m both hopeful that it might help the older ones to catch up but I’m equally fearful of what this different treatment may do to us/the kids on an emotional level. Plus, so far ‘hoping for the best’ has not yielded any results in ten years. I would be most grateful for any insight and tip from you.

Thank you for your question about reviving your family’s minority languages, German and Spanish.

Please don’t think that you have spoilt your children’s potential, whatever the level of their understanding of German and Spanish, it is beneficial for them. Also, only look back to learn from the past, don’t look back with regret – at any point in time, we make the best possible decisions with the information we have at hand in the circumstances we are right then.

The situation you describe is not uncommon in a multilingual family – the oldest child is often the one that manages to pick up the minority language(s) better than his or her younger siblings. Some of the reasons for this are that the first child gets more one-to-one interaction with the parents and that there are no elder siblings who attend nursery or school (and thus often bring in more of the majority language into the home).

There is a 4-year age difference between your eldest and your middle one, so the eldest would already have been at school when the middle one started speaking. The eldest son would probably also have been watching children’s programs on TV and his younger brother most likely joined him, so perhaps got more used to English media from an earlier age than his big brother. Family dynamics are different in every aspect when it comes to the second, third (and so on) child – family languages are no exception from this.

I wanted to explain this so you can understand that the situation you are now finding yourself in is not a conscious choice, but something that just happened over a period of time. It started well before the point where your second son was able to express his language preferences.

You can get both German and Spanish back on track with all of your children, but this is not something that will happen overnight. It will take determination, commitment and a lot of patience (both with yourselves and your kids) to turn the tide. It is however perfectly doable. In a short Q&A I can only give you a few pointers of what to do – ideally, this would be something I would work with a family over a longer time.

That you have a new baby in the family will work in your favour. Why? Because for a couple of years you will have the opportunity to speak German/Spanish to him or her, without any kind of resistance. So my first recommendation is that you make this a firm habit – no English with the baby, only German or Spanish. Talk with the baby a lot when changing the nappy, dressing or giving him or her a bath. At the same time ask the older brothers to help, but when doing so, continue using whichever language you use with the baby. Ask them to help you: to get the wet wipes, a pair of socks; to hand you a towel.

Explain that they can be of big help when teaching their baby sister or brother German and English. Start with the elder one and do everything you can to get him in on the thought – this will make it easier to get the younger one to go with it as well.

Your middle child will take some time to get used to this, and this is where your patience will be tested. Translate whenever he does not understand something, but if the baby is present, do not resort to speaking only English. It is very important that the baby is the cue for all of you to use your family’s minority languages. However, it is also vital that the languages do not become a barrier – show the older siblings some extra love so they don’t feel left out.

They may question the language choices – children are pragmatic, so they probably will – and this is your chance to explain to them how important it is that the baby learns both German and Spanish. Do your children have grandparents or other relatives that only speak German or Spanish? If yes, use them as a reason why it is important for the languages to be maintained so everyone can talk to each other when you meet.

Gradually introduce more of German and Spanish into the home by using the languages as much as possible in different situations. For further ideas on how to go about bringing German and Spanish back in to your everyday family life, please read my posts on (re)introducing a family language and practical tips for (re)introducing a minority language.