Q&A: How to pass on two heritage languages and an additional language to your children 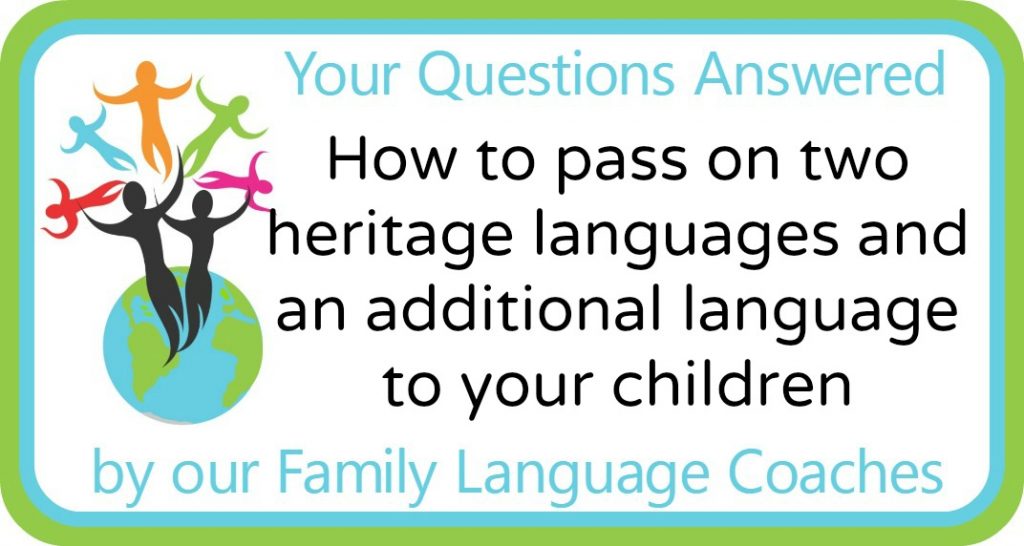 My name is Caroline and I am a native English speaker who has since become nearly fluent in Spanish. My husband is a native Korean speaker who speaks English as his second language. I have been studying Korean and am at an intermediate level. My fiancé is at a pretty advanced English level, but still struggles with grammar. He does not speak any Spanish. Together, we speak Korean for daily activities and English for more complicated subjects.

My family speaks only English, and my husband only Korean. We currently live in Korea, but are also considering moving back to the United States. We are hoping to start having kids soon, and so are considering how we could raise our children. My question is if there is a way to incorporate all three languages into our family? Especially since I am not a native Spanish speaker. But, I love Spanish so much and want to pass it onto my kids.

In Korea, however, I am one of the only Spanish-speakers I know. If we move back to America, I know we would have easier access to Spanish, but I am nervous we would have limited access to Korean, which could harm our children in communicating with their grandparents.

Thank you so much for help with such a complicated situation!
Caroline

Thank you for writing to us and for laying out your family language situation so carefully.

If I understand correctly, you would like to transmit three languages to your future children without putting into jeopardy either of your heritage languages, especially Korean due to potentially limited resources should you choose to live in the United States.

I think that the first thing to consider, as you have already done for yourself and your spouse, is to recognize the varying degrees of proficiency and skill levels in a language. As you have noted through your own experience, being bilingual (or multilingual) does not mean each of the languages is mastered in the same way. This can and will be the same for your children.

Raising bilingual children allows parents the ability (to a certain degree) to decide what set of language skills and what level of proficiency they want their children to develop. So, for example, since English and Korean are your heritage languages, you will probably want to put a greater emphasis on these languages as they will be needed to communicate with family members and to potentially thrive in the place you choose to live. This, however, should not impede you from adding an additional language with a smaller set of language skills and/or a lower level of proficiency that would allow you to focus on your heritage languages.

Secondly, where you live will obviously make an impact on language. Generally speaking, once children reach the age to attend school, they typically adopt the community language. Your efforts in the home therefore need to counterbalance this natural tendency by placing a greater emphasis on the minority language(s). If you remain in Korea, Korean will be the community language your children will most likely choose, and you will therefore need to place greater emphasis on English (and Spanish) in the home. If, however, you make the choice to live in the United States, your emphasis will need to be on Korean (and Spanish) in the home.

Finally, I’d like to address your concern regarding the lack of resources in Korean should you move to the United States. This is an important element to consider and a situation you will want to anticipate and plan for. You will need all the support you can get to maintain a heritage language that is less mainstream than English or Spanish.

Emotional bonds are so important for instilling a natural need and desire to communicate in the target language. This, however, can also be created in simple ways beyond traveling. Storytime with colourful, authentic literature from the heritage country, specialty food items being incorporated into your family meals, movies and cartoons in the heritage language and Skype calls with family members in the heritage land. You can also seek out support groups by finding other young parents with similar linguistic goals for play dates or just for the parents to chat.

I would add one final piece of advice about how to manage three languages in your home by referring you to this article about how I personally adapted the one parent one language (OPOL) to transmit three languages in the home. It requires a bit of discipline and a little creativity, but it can be done.

I wish you the best of luck in your linguistic endeavours. Please don’t hesitate to write again should you require clarification on any of these points.