by Rita | Oct 19, 2016 | Being the parent in a multilingual family, Challenges, Grandparents, Language development | 2 comments 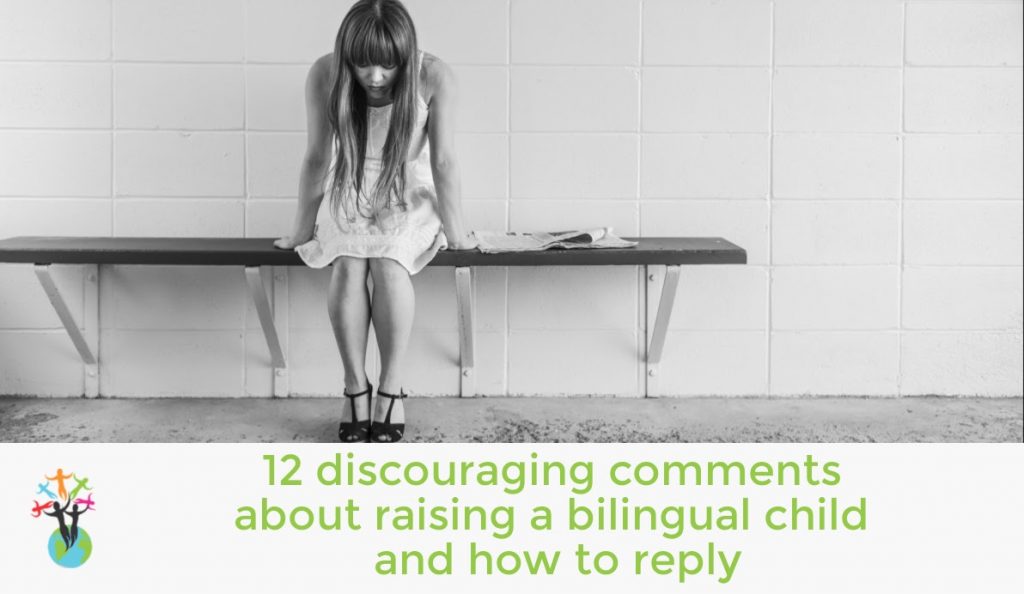 As parents of bilingual children, many of us have been there: finding ourselves in a situation where others give us advise on what is best for our children when it comes to their languages, and how we should behave as a family. Sometimes we get brilliant ideas on how to succeed, but this is unfortunately not always the case, as I have seen from the many questions coming in and reading parent’s thoughts online. Below are some of the most frequent comments I have come across and suggestions on how to reply to them.

1. “Your child will get confused”

You would think that this myth would have been eradicated by now, but it isn’t, so it needs to be reiterated. Children are extremely adept at separating languages they speak with different people and will not get confused in a family with more than one language.

2. “Her speech will be delayed”

Knowing another language does not take away from your ability to learn. On the contrary, there is research that indicates that since bilinguals constantly have to suppress one (or more) of their languages, they get better at focusing and at avoiding distractions. These are abilities which are likely to contribute to a greater success in education.

4. “Two languages are too much for a small child”

The majority of the world’s population speaks more than one language. There are millions of children that are living proof of children’s ability to pick up two or more languages while they are growing up.

5. “Developmental differences? Only speak one language with your kid!”

Whether your child is on the autistic spectrum or is developmentally different in any other way, this is no reason for not raising him or her bilingual. On the contrary, it may be harmful for the child if a parent stops speaking a language the child is used to talking with them.

Any additional language is useful and a family language is particularly beneficial for a child. A language is not only a means of communication, but a route to embracing another culture. Knowing the family language gives a bilingual child confidence and helps them explore their background and understand their identity.

7. “You should concentrate on supporting them with the community language!”

8. “A bilingual child will not learn the majority language properly!”

Knowing a minority language does not have a negative effect on the learning of the majority language. On the contrary, having a strong foundation in any language is beneficial for learning further languages.

9. “Wait with your language until they are fluent in the language of the school!”

Children have the capacity to learn several languages at the same time. Simultaneous bilingualism is a common way to learn languages, so there is no need to wait for a child to be fluent in one language before introducing another, especially not a language which the child will have plenty of exposure to. If you start with the majority language, it can actually be quite difficult to start with the minority language later on – it can be done, but as a parent you will have to put more effort in.

10. “You should speak the language of the country you live in!”

If someone tells you to only speak the language of the country you are living in, they most likely have an underlying agenda, based on a narrow-minded view of the world. More often than not, there is no way you can convince this person to change their mind, so my recommendation is to smile, move on and forget about the comment.

If your children are growing up with more than one language, it is highly likely that they already are in one way or another not exactly the same as all other kids in their class. Don’t deprive your child of a language because you are worried they could be bullied for it – teach them to be proud of it and of the culture it represents.

12. “We will not understand what they speak!”

Some of your relatives, maybe your child’s grandparents, may we worried that they will not understand if you kid learns the minority language first. Remind them that your children will learn their language as well and that their grandchildren will have many more benefits from becoming bilingual.

Always keep in mind that you decide how you want to raise your child!