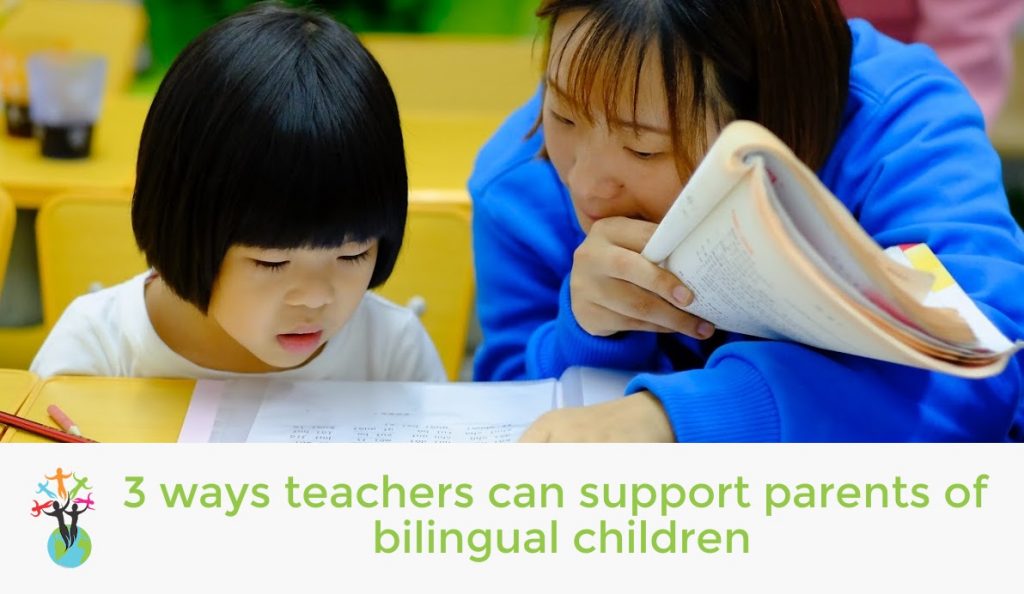 There was a time when teachers and even speech therapists were during their training told to recommend to parents in multilingual and migrant families to stick only to the majority language and stop using their native family language at home. Today we know that this is an incorrect advice to give parents of bilingual children. Instead teachers should support the family’s bilingualism – how to do this?

1. Don’t ask parents to stop speaking their home language with the children
Since many parents have told me that they are still being advised to switch to the majority language by a teacher or nursery professional, I have to start with the obvious. Research has shown that a solid home language is the best foundation for a child to learn an additional language. Especially when a family moves from one country to another there are a lot of changes to everything in their lives. For a family to be asked to change the language they are used to speaking with each other adds another big stress factor to the family life. Telling parents to drop a language is not beneficial for the relationship between the parents and the school – on the contrary, such a request will in most cases cause resentment and insecurity. Also, keep in mind that if parents switch to a language that they are not fluent in, this can affect their relationship with their offspring. In addition, it can lead to parents losing their authority with their children who will learn to communicate better than them in the majority language.

3. Show the parents that you support bilingualism
So far it has been about what not do – what to do instead? First of all, emphasize the value of all languages. Showing a genuine interest in the family’s language set up is vital for giving the right message to the parents. Ask questions about which languages are used in the family and who speaks which language. When you show parents that you appreciate their home language, they will gain confidence and you will build a good relationship with them. Encourage the parents to show a positive attitude towards language learning in general. Speak to them about the importance of reading and that their children have access to books (in all their languages). You can also recommend TV programs or on-line resources which are easy to understand and with useful vocabulary and give any further advice if the parents ask for it.

Teachers do a wonderfully valuable job and are so important to many aspects of a child’s life – having ALL teachers support multilingual families and bilingualism would be fantastic!