9 reasons why a child might not become an active bilingual

by Rita | Mar 20, 2013 | Bilingualism, Challenges, Family life, How to motivate a bilingual / multilingual child to speak a family language | 3 comments 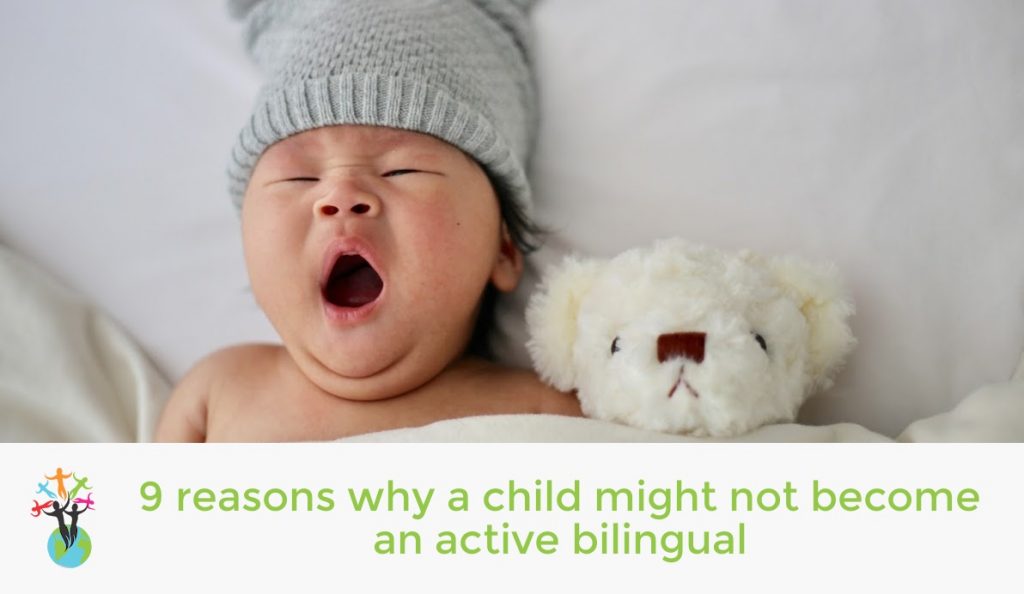 Why do not all children in multilingual families grow up to become bilingual? What are the differences between the families that succeed and those who don’t?

First, let’s start with some quick myth-busting: How clever or linguistically talented a child is has nothing to do with becoming a bilingual – any normal child can learn the languages of the family. The socio-economic status of the family is also not a deciding factor, nor is how educated the parents are – all parents have the ability to pass on a language to their children.

So why do some children only acquire a passive understanding of a family language? Here are the main reasons why:

1. Lack of conscious effort
Some parents who have themselves grown up with two languages think that it’s something automatic, just like it was for them them, so they don’t think they have to pay attention to passing on the language. Often at the time when the parents notice that the children really can’t express themselves well enough, the children are at an age where a change in behaviour and family language patterns would require a bit of extra effort, so it does not happen.

2. Lack of consistency
For children to acquire a language, they need interaction with other speakers. If parents and family members frequently switch between languages a child will most likely pick up both (or all) languages, but at the point when the child goes to school, the majority language might take over. Start of nursery or school is the time when consistency is most required from the parents to keep the home language(s) alive.

3. Lack of confidence
There are parents who are not confident that they would be able to “teach” their children their language. All normally developed children will learn to speak and they learn from their parents. You do not need to know your language perfectly, neither do you have to act like a teacher, just be yourself.

4. Lack of exposure
To acquire a language children should be exposed to it for at least 20% of their waking time – the general consensus is a recommendation of 30%, but it is not possible to give an exact percentage. The exposure should be interactive and engaging. If children only occasionally hear a language and not on a daily basis, they may not become active speakers of it.

5. Lack of pride in the language
This I find really sad – there are those parents who are not proud of their native language and think that it is not as useful as the majority language, so might not bother passing it on. No language is better or worse than the other and all language skills are beneficial.

6. Low status of the language
If a language is spoken mainly by a group of people whose socio-economic status is on average lower than the one for majority language speakers, this may lead to the incorrect assumption that the language in itself is less valuable. Parents that feel like this, may decide not to pass their language on. An incorrect decision, on so many levels.

7. Myths about bilingual children
It really upsets me when parents give up on passing their languages on due to misconceptions. Despite all the research to the contrary, there are still many myths about bringing up bilingual children: that children get confused by the many languages, that their development will be delayed, that it’s a disadvantage for them at school, that they will not learn any language properly. Myths, myths, myths! I really do hope parents would seek the correct support.

8. Incorrect advice
It is unfortunately not unusual for professional people to advise parents to drop a language. This misguided advice may come from teachers, GPs or even speech therapists. It is important to always seek correct information from professionals that are familiar with bilingualism.

9. “We didn’t have the time”
I have heard some parents stating “time” as the main reason for not bringing up their children to become bilingual. I have deliberately put this in quotation marks, as it is hardly ever the real reason. Yes, family life is busy in today’s world, but you still have to communicate! When communicating you are using a language that your child can pick up. Given the right guidance, passing on the family’s languages becomes a part of the daily routine.