Bilingual children: 7 reasons why it may not happen

by Rita | Sep 17, 2014 | Being the parent in a multilingual family, Challenges, Family life, Practical advice | 6 comments 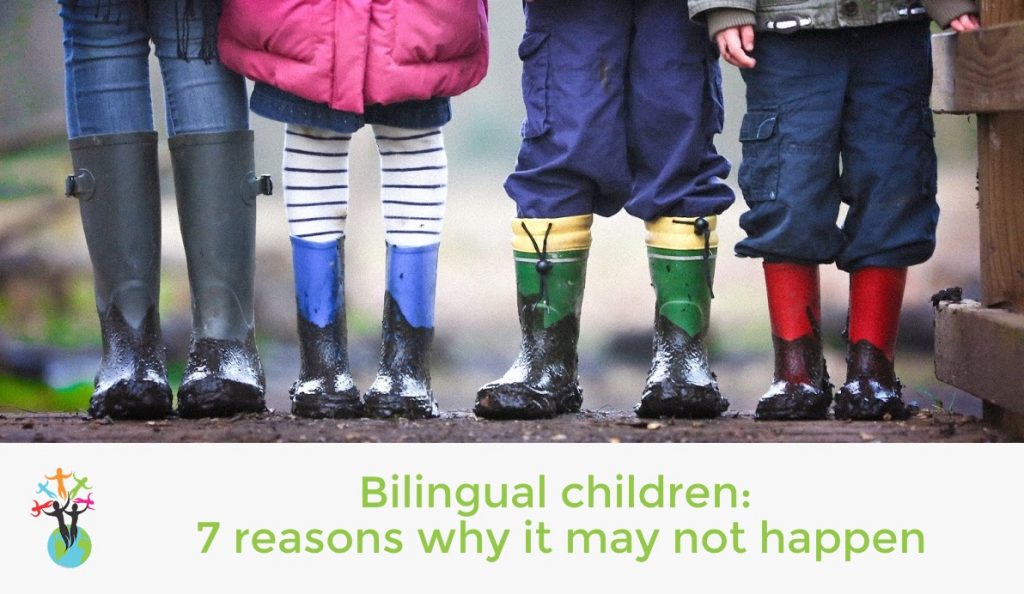 Parents who want to bring up their kids to speak more than one language can learn a lot from families who have been successful at bringing up bilingual children. However, I also think that a great deal can be learnt from those parents whose children grew up to be monolingual, as well as from adults who come from a bilingual family but only speak one language themselves. Below are the most common reasons I have been given for a child of a multilingual family becoming either monolingual or a receptive bilingual (aka ‘passive bilingual’):

1. “We didn’t really think about the languages”

This is perhaps the comment that I have heard the most often. As I have stated in another post, bilingualism does not happen just like that, unless the environment is ideal. In the perfect scenario, a child is consistently exposed to both (or all) languages and interacts with several people in them. Parents who are bilingual often admit that they thought their children would just naturally grow up to speak the family languages, in the same way they did themselves, so they didn’t pay much attention to how much their children were exposed to the different languages.

Following from the above, when parents noticed that all languages do need conscious nurturing, they tried to introduce their children to the lesser spoken language, normally a minority language. Other families may well have planned to raise their children to become bilingual, but of some reason or other decided to wait with the introduction of the second language. In both cases, a change in the family language pattern is necessary – an easy thing to say, but a whole different matter to do in real life. (If you haven’t yet heard about Pricken, the Swedish-speaking kitten, you can read about my struggles switching to another language with my daughter here.) Several parents have said that they did not have the energy to insist that their children spoke a different language with them.

3. “Our children did not want to speak our language”

Many parents claim that their children did not want to speak their language at all. I say claim, because I find it a bit hard to believe that the resistance would have been there from day one. A child will learn the language a parent consistently speaks to him or her. The question to ask is what happened before the child started to refuse to speak the language. Was there enough interaction with the child in the language? Were the parents actually consistent, or was it more of a 50/50 split between the majority and the minority language? Did the parents give up too easily? Did the parents really think it was important to pass on the family language?

4. “I spoke the language before I went to school, but then stopped speaking it”

Quite a few adult monolinguals have told me that they remember being fluent in a family language when they were small, speaking it easily with their grandparents and other relatives, but then something happened when they went to school and they stopped speaking it. Being immersed in the majority language all day, getting more friends and the common language is the majority language, wanting to be like everyone else: starting school (or nursery) is a crucial time and at this point it is more important than ever for parents not to change the language they speak with their child. The same adults state they wished their parents would have insisted on them speaking the family language.

5. “My parents spoke the minority language with each other, but not with me”

6. “We were told to stick to only one language”

It constantly surprises me how many families are (still today!) given the wrong advice of dropping a language for one reason or another. I am sorry to say that many parents have also followed this advice and their child has missed out on the chance of becoming bilingual early on in life.

Time can always be used as an excuse for not doing something. In my opinion, the real reason is not the lack of time but lack of something else. We will always find the time and a way to do something that we find important enough. In my book I walk you through the different stages of deciding, preparing and planning to bring up a bilingual child and give practical advice on how to do it and then stick to it when life throws its curve balls at you.