Minority language at home – mL@H: use it if you can! 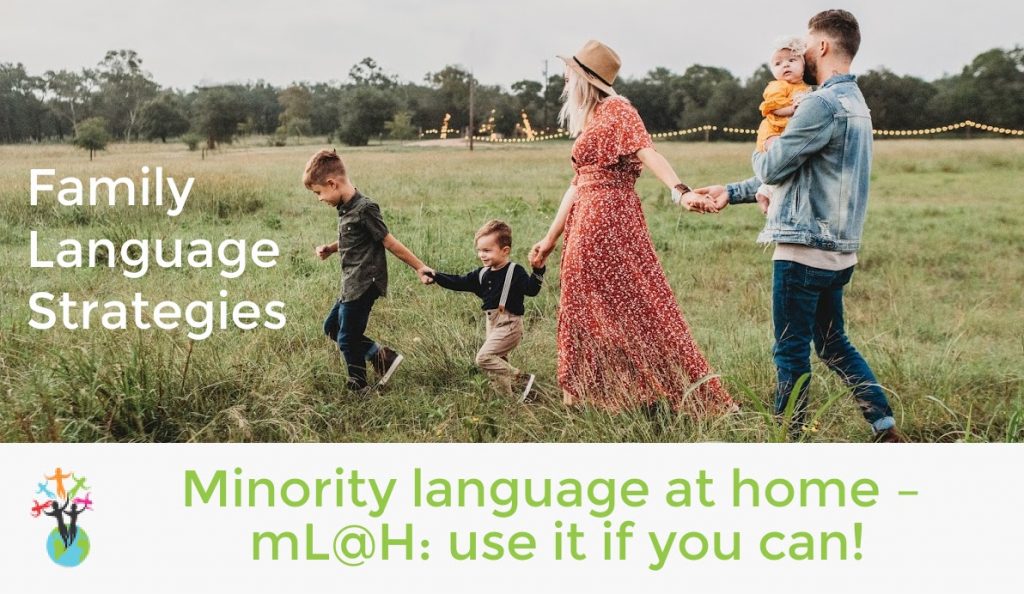 The first post in the series about bilingual family language strategies was about one parent/person, one language or simply OPOL as it is generally known. Now it’s the turn of the approach called minority language at home, with the slightly more complicated acronym of mL@H.

As the name indicates, a family that uses the mL@H strategy only speaks a minority language with each other. The family’s common language can, but does not have to be the native language of both parents. The children become sequential bilinguals, as they learn the minority language first and the community language later from other sources, normally when starting nursery or school. (In an OPOL family, the children are normally simultaneous bilinguals, which means that they learn both/all their languages in parallel.)

The mL@H system has its obvious advantages, in so far that it is clear who speaks what language to whom in the family and that there is no need for translations within the home, but you will also come across words of warning if you search for advice on mL@H.

Some have claimed that it requires “strong nerves by the parents, since the child may not catch up with his monolingual peers in the majority language until around 5 years of age”. Yes, it may feel a bit worrying to send your little one out into the world with no or only limited knowledge of the language they will be surrounded by all day (I know I did, though my 6-year-old daughter did not seem to mind). Experience has however shown that children are very adaptable and quickly pick up a language once submersed in it. A “risk for complete linguistic isolation”, even a small risk, is a bit far-fetched in my mind – children do not need a common language to find ways of playing together and coming up with alternative ways of communicating!

Another caveat, equally unlikely in my opinion, is that if parents “decide to speak the minority language at home, but not in public, child might feel that this language is not being good enough to be spoken in public. This may affect the child’s identification with the minority language.” Generally mL@H families always speak the minority language, independent of where they are – it is unusual to switch language at the door step (although there are families who do this). I strongly believe that parents should not only pass on their language, but also their pride in their language and culture and by doing this, the child will not regard the home language being second rate.

The mL@H may not have been as popular as OPOL in the past, but today it has the support of several experts. In her research, Professor Annick De Houwer found that 96% of children growing up in a family that uses mL@H become bilingual, making it the strategy with the highest overall success rate. Professor François Grosjean also favours this approach, because it “has a clear advantage in that the weaker language (the home language) will receive much more input than if only one parent uses it”. Professor Barbara Pearson Zurer finds that with mL@H “parents are carving out a domain for the minority language where it doesn’t have to compete for the child’s time and attention”, thus giving the minority language a solid base.

Should every family raising bilingual children now switch to mL@H?

Of course not. Statistically the answer may be ‘yes’, but in real life this is not possible. The mL@H approach works well if parents have a language in common in which they are comfortable enough to make it the only language they speak to their children. If one parent feels awkward (or, perish the thought, both do) and not confident about using the language, I cannot recommend the mL@H approach. I have said this many times before, and I will say it again, the very purpose of language is communication, if the choice of language becomes something that negatively affects the relationship between a parent and a child, in my opinion, it is not the right choice. There are other ways of making sure your children become bilingual, not being able to fully connect with your offspring is too high a price to pay. Also, OPOL has worked wonderfully well in many families and may well do for you, too! (Also keep an eye out for the next articles in this series for further approaches).

So who should use the mL@H strategy?

The obvious candidates for the mL@H system are migrant families who move to a place where the language the family members already speak with each other changes from being the majority language of the community to being the minority one. A move is a big upheaval in any family life, keeping the same language is beneficial on many levels. It offers a continuum in a situation where most other aspects of the family life changes and serves as a “safe haven” for the family language.

mL@H is also definitely worth considering if both parents know a common language well enough to be using it on a daily basis and in different scenarios with their children. If I had to decide whether to speak a language which is not my native one with my child, I would ask myself questions such as:
– Would I feel comfortable to discuss a difficult matter in the language – an example would be that my child has been bullied at school, could I find the words to express myself?
– Will I resent not using my mother tongue later on in life?
Changing the language you speak with your child is not easy, I know this for sure. Note that you do not have to be accent-free or even perfectly fluent (whatever those terms mean) to speak a certain language with your child – your little one will not pick up your small deviations from the agreed language norm (but may well soon start pointing them out to you).

Taking the above into account, would I recommend that you choose mL@H as your family language strategy? Yes, I would, if it feels right for you.

What about you – is mL@H your strategy of choice? How are you getting on?