by Rita | Apr 20, 2016 | Challenges, Family life, How to motivate a bilingual / multilingual child to speak a family language | 0 comments 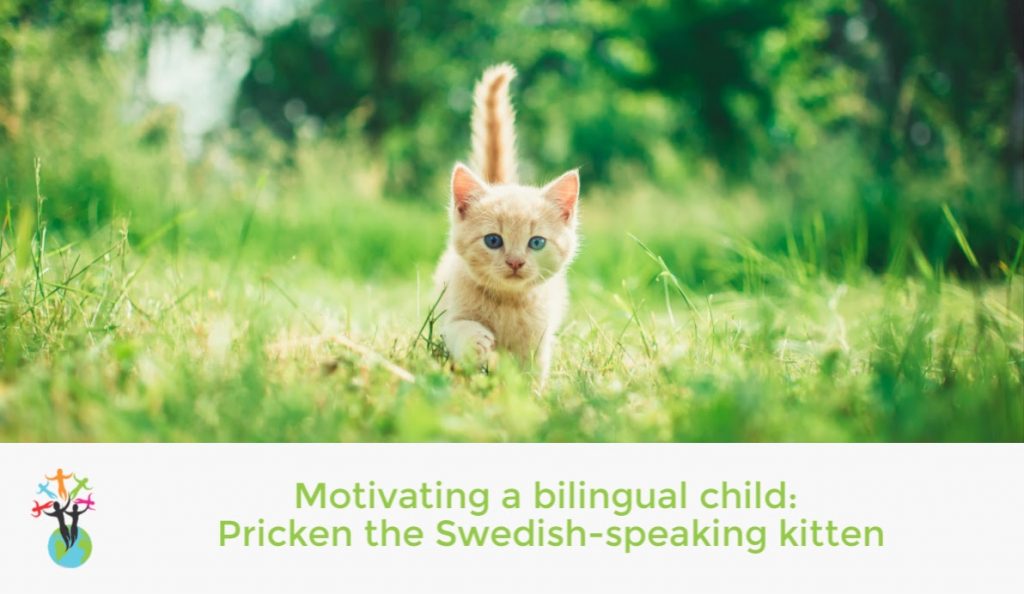 “How to motivate my child to speak the minority language?” is one of the most frequently asked questions to our panel of Family Language Coaches. This challenge will also be the topic of the up-coming Raising Multilingual Children blogging carnival, which I will host here next week.

Motivating a child to speak the minority language

“If you had to choose one tip, which would be your most effective one for encouraging kids to use the minority language?” was the question I asked other bloggers to answer, and I am very much looking forward to the responses. I also asked myself and instantly I thought of Pricken, our Swedish-speaking kitten! If you have listened to any of my interviews, been to one of my talks or read my book, you would already be familiar with Pricken, but I feel he is still worth the mention. Why? Let me tell you. Pricken came to play an important role in my eldest daughter’s language learning. The story about Pricken shows how a little bit of creative thinking can come to the rescue when you are stuck and don’t know how to motivate your child to fall more in love with the minority language. I also hope it can serve as an inspiration to other parents who want to start teaching their child an additional language.

I grew up in a bilingual home (Swedish and Finnish) and felt comfortable speaking both, so for me it was equally as easy to speak one or the other of the languages to my eldest daughter when she was born. Her father’s mother tongue was Punjabi and at the time he was still learning Finnish. It was clear from the start that we wanted her to learn Punjabi, so she could communicate with her grandparents and relatives in India. To avoid making the language situation too complicated, I chose to speak Finnish with her. I knew however, that at some point I would have to switch to Swedish, as I wanted her to do her education in Swedish, which is an official minority language in Finland My daughter was an early speaker and very quickly picked up that mummy’s and daddy’s languages were different. Already when she was not yet able to put together a sentence, she translated words she knew in both languages.

Changing the language I spoke with my daughter, and how I miserably failed

When she was five years old, I decided it was time to introduce Swedish. In Finland children do not go to school until they are seven, so I still had time to pass on my other mother tongue to her (actually, it’s my “father tongue”). She had of course heard me speak Swedish with her grandfather and other people and she had attended a bilingual kindergarten, so I didn’t think it would be that hard to start teaching her. How wrong was I! My attempts to speak Swedish were met by her total refusal to listen. With all the determination a five-year-old can muster she ignored everything I said in Swedish. She didn’t show the remotest bit of interest in the language. I had expected some reluctance on her part, but I could never have imagined how completely against the idea she would be. In hindsight, her reaction is however very much understandable – the language you speak with someone is a vital part of your relationship. Any bilingual knows how odd it feels when you have to speak the “wrong” language to someone (for example when there are monolinguals present). When a parent tries to change such an intrinsic part in the relationship, what is a child to do? Rebel, of course.

Kitten to the rescue

All attempts to introduce Swedish through songs, her favourite stories, children’s programmes and the like failed. I needed a better plan and after some desperate time of pondering what could make my daughter change her mind and embrace Swedish, I thought of something that might have a chance to work. A kitten! She had always wanted a kitten, so I decided that we would finally get her one – she was of course delighted. The thing was – as I presented it to her – that the kitten came from a Swedish-speaking family, and didn’t know any Finnish. I admit not being totally honest and pulling her heartstrings to get what I wanted when I said that surely we couldn’t be so cruel to not only take the kitten away from its family, but then also speak a language it didn’t understand. It was music to my ears when she agreed and asked me if I could speak Swedish to the kitten so it would feel at home! And speak I did – Pricken (word for ‘dot’ in Swedish after a small black spot on its nose) must have been the most spoken to kitten in the country! Soon my daughter also wanted to say something to her kitten and it was amazing how the receptive knowledge she had of Swedish started to turn into an active skill. She asked me words and phrases and slowly, Swedish became an accepted language of communication between the two (three) of us. I then gradually moved to only speaking Swedish with her even when Pricken wasn’t with us. Sadly, Pricken disappeared after about six months – maybe it wanted some peace and quiet, I do not know, but it had however done a big favour for our family. Pricken brought in Swedish to our home and I was able to build on this. Two years later my daughter was ready to start school, the Swedish-speaking village school.

Should all parents of reluctant minority speakers get a pet?

What is the moral of the story? Buy a pet? No, please do not to rush out and get a pet – though if you have considered getting one in any case, please feel free to use my approach if it is one that flies with your child. The moral of the story is that a child will be very reluctant to speak a language, if there is no need and want for it. Reasons such as “It will be useful for you in the future” or “This is really important to mummy/daddy” are not effective motivators for a child. Think carefully about what is important (or fun!) for your child, put yourself in their shoes, then find a way to make this motivator part of the language learning and use. Good luck!