Multilingual families – why a child might grow up monolingual 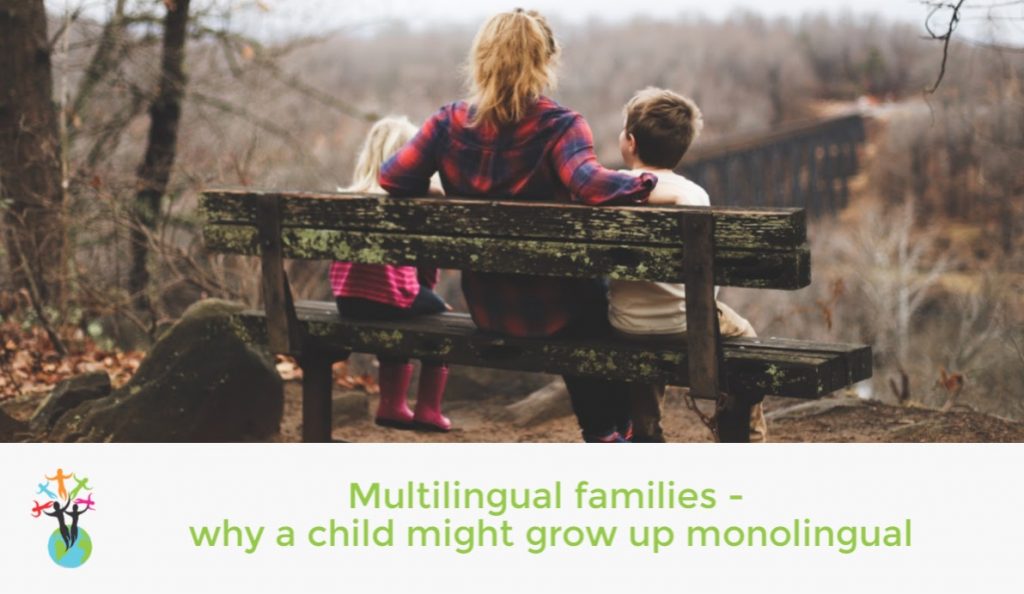 I love the African proverb “It takes a village to raise a child” – for the purpose of the topic at hand, I would like to expand it to

“It takes two villages to raise a bilingual child”.

This is of course not strictly true, but it does describe the need for extra resources and support networks that a multilingual family often needs to be successful at bringing up the next generation to speak the family languages.

Every family defines their own goals and others should respect this choice. In my writing, I do my best to stay positive and concentrate on ways to move towards the language and fluency goals parents have for their kids, whatever they may be. 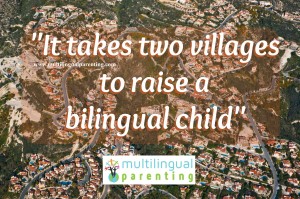 Sometimes it is, however, good to reflect on the past, to learn for the future. This post is based on comments from families where the children have grown up to only speak the majority language. For the record, these children are normal, happy, well-rounded individuals, so the world has not fallen apart, nor have the children failed at school or missed out on deep family relationships.

What I did notice, though, was an underlying tone of regret in the parents’ responses, and I would like to say the following to these and other parents who think they could have done something differently in the past:

At any point in time, we make the best possible decisions based on the information we have and the circumstances we are in. If you were to go back in time, you would do exactly the same, since you thought it was the right thing to do, and maybe were not aware of some relevant facts you know now. Enjoy the present and make the best of it. Share your experience with others and help where you can.

This is what parents shared with me when asked why they think they came to raise a monolingual child in a multilingual family.

“We didn’t try”
Some parents made a conscious decision to stick to one language only. Parents’ reasons for choosing the only-one-language option were based on either myths about multilingual families, limiting beliefs about the parents’ own abilities to pass on a language or others’ opinions. None of those has to be a reason not to give a child the gift of speaking more than one language.

“It was just too much hassle”
Certain parents did decide to try to pass on their languages but gave up when things did not go according to plan. As we all know, very little goes according to the first plan as far as raising children goes. Bringing up a bilingual child is no different – but there is always plan B, C, D and the rest of the alphabet. When setting off on the journey of a multilingual family, it is important to be realistic and not to get disheartened if you encounter a problematic situation. Reach out to the villages! Speak to other parents, ask experts, read a book about the topic – there is plenty of help at hand to support you through the difficult times. It can be done!

“We were waiting for the right time to start”
Other parents were advised to first let their child learn one language properly, and introduce the second one later. Sequential bilingualism is fine as long as the parents are aware of the implications – not only for the child, but more so for themselves. Let’s say parents decide to wait until the child is four or five to introduce the other language. Given the right amount of exposure to the language, a child will become fully fluent. By this time the family is however used to speaking one language only and one parent will have to change a deeply rooted habit. This is not easy to do and the temptation to give up will be far greater than if the parent had spoken the language since the child was born. Making a change in a family’s language habits takes a lot of effort and commitment – I know, I have done it.

Thinking you can’t do it as others have failed

“Most other families we knew had failed”
When you are surrounded by other families whose children did not grow up to become active speakers of the family’s minority language, it is easy to think that you are faced with an impossible task. It can put serious doubts in your mind about whether you will succeed. However, since you are thinking about this ahead of time, you have an advantage as you can take measures to make sure you stay on track towards your goal of passing on your family’s languages to your children. Ensuring enough varied language exposure for your offspring and staying consistent in your own language use are the foundation of your success.

“I wasn’t fluent enough in the language”
There is a common misconception that a bilingual must have a near perfect command of his or her languages – this is very rarely the case. The language dominance differs depending on which area of your life you use your languages. If you have grown up as a bilingual but feel that you don’t know one of your languages as well as the other and therefore think you shouldn’t use that language with your children. Don’t let this stop you – if you make sure that your children get exposure to the language from other speakers as well, they will grow up to speak it well. What will also happen is that your own skills will improve!

Assuming that you need teaching skills to succeed

“I am not a teacher, I don’t know how to instruct my child”
Of some reason parents sometimes feel that they ought to have teaching skills to be able to bring up a child to become bilingual. If you were to try to teach your children a language you don’t know, then yes, but as long as you are passing on your own language, you just need to speak it, adhere to a certain amount of consistency in speaking it and make sure they get enough exposure to it. Small children acquire the second family language in the same way as they do the first one, no special teaching required.

Being afraid that you will confuse your child

“I thought switching between languages would confuse my child”
Although research has consistently shown the opposite, there are still claims that a child could get confused if more than one language is spoken in the home. Your children might mix their languages for a short period of time, but they will soon learn to separate between them. They will also not become confused about their cultural identity, on the contrary, they will have the perfect tools to explore both/all sides of the family heritage.

Thinking that you will feel left out

“I didn’t want my child to learn a language I don’t understand”
There are cases where a family has given up on the thought of raising a bilingual child due to one parent worrying that they won’t be able to communicate with their child. Since a child usually initially spends more time with the mother this concern is one that has been expressed by fathers-to-be who do not know their partner’s mother tongue. Sometimes also grandparents are afraid to miss out if their grandchild learns the “other” language first. It is an understandable worry to have: you want to make sure you can bond as well as possible with the little one and communication is a vital part of the process. The fact is, though, that small children learn to speak over a fairly long period of time and it is possible learn alongside them. In any case, soon the child will speak both languages. Giving him the wonderful gift of being bilingual is certainly worth everyone’s effort.

Believing it will just happen

“We took it for granted that the kids would learn both languages”.
Some children are fortunate to grow up in and environment that is ideal for becoming bilingual – I can count myself as one of these lucky people. This is, however, by far not the case for every family. Being aware of the potential pitfalls and making sure your children get enough and consistent, interactive exposure to their languages is vital to keep the languages alive.

(This is a revised and extended version of a series of posts published earlier.)