Time and place – T&P as a family language strategy 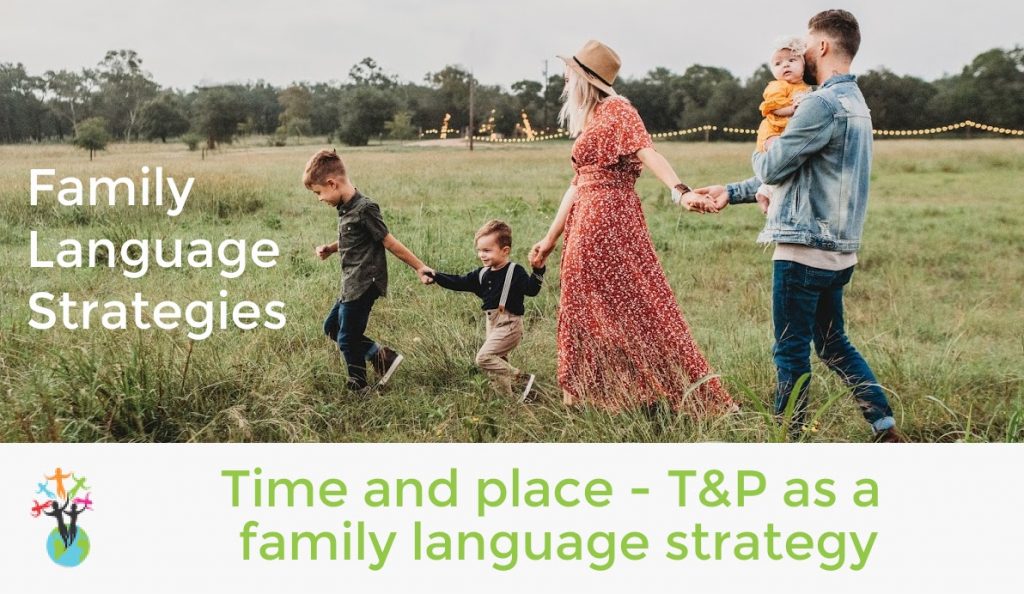 When raising a bilingual child, it is always good to plan ahead so that everyone is clear about who is going to speak what language in the family when the new baby arrives. This post is the third post in my series of different approaches parents can take if they decide to bring their child up with more than one language – the strategy is called time and place (T&P). The first post of the series was about one parent/person, one language (OPOL) and the second about minority language at home (mL@H).

The T&P approach means that parents separate the languages used with the child either by time or by place (or both).

Examples of T&P where time is the deciding factor:
– use one language during the day and another in the evening
– split the languages between weekdays and weekends
– speak different languages during alternating weeks or months
Some families have found that frequent swapping between languages is difficult to keep up with and have opted for longer periods for each language. You can read this article from Trilingual Mama about her 2-weeks-per-language system with her children.

When place is used as the “language separator” parents choose a specific place which is dedicated to a certain language. For the child this specific place will be the signal that it is time to switch to a different language. Examples of with T&P using place are:
– using one language inside the home and another outside it
– having rooms of the home dedicated to different languages (I have heard of families switching language mid-sentence when walking from one room to the next!)
– immersion schools are practically one variant of T&P, if the parents do not speak the school language at home

T&P is not nearly as popular as the OPOL and mL@H strategies, and this may be the reason that it has not been studied in any great extent. The main reason why T&P is a less used strategy is probably because it does not come naturally, like OPOL or mL@H can do. Instead it is definitely an approach parents have to think about and agree upon. T&P also requires quite a high level of commitment and consistency, especially in the beginning, until it becomes a routine. Families that successfully use the T&P approach however often say that once used to it, the children themselves are the biggest proponents of the approach and are quick to point out if anyone uses the “wrong” language.

Who should use the T&P strategy?

The typical parents who use the T&P system are those who speak more than one language with their children and want to separate the languages rather than switching between them depending on which language feels most appropriate (you can read more about the latter approach in next week’s post). The reason for speaking two different languages with a child is often that the parent is fluent in two languages and wants to pass both of them on to the next generation. This approach is also suitable for single parents if they want to bring up a bilingual child.

Parents who want to teach their child a language that they themselves know but are not fluent in also often use the T&P strategy – this way they can still use their native language to discuss more complicated or delicate matters with their children and reserve the additional language for “easier” activities. The child will of course need a more varied exposure to the language from other sources if the aim is for him or her to become fluent in the language.

T&P can also be used by parents when they want to introduce a language later on in a child’s life. Using the T&P method parents can introduce language gently for example through play and songs. By having a set routine in place when the language is used, it easier to stick to the plan.

If you find that T&P would be the best approach for your family, I recommend that you set up a Family Language Plan so that you get a clear picture of how much exposure your child will get to each language, and whether you need to find additional support for it to ensure that your little one. In my book “Bringing up a Bilingual Child” I have a chapter on how to put together a plan for your own family.