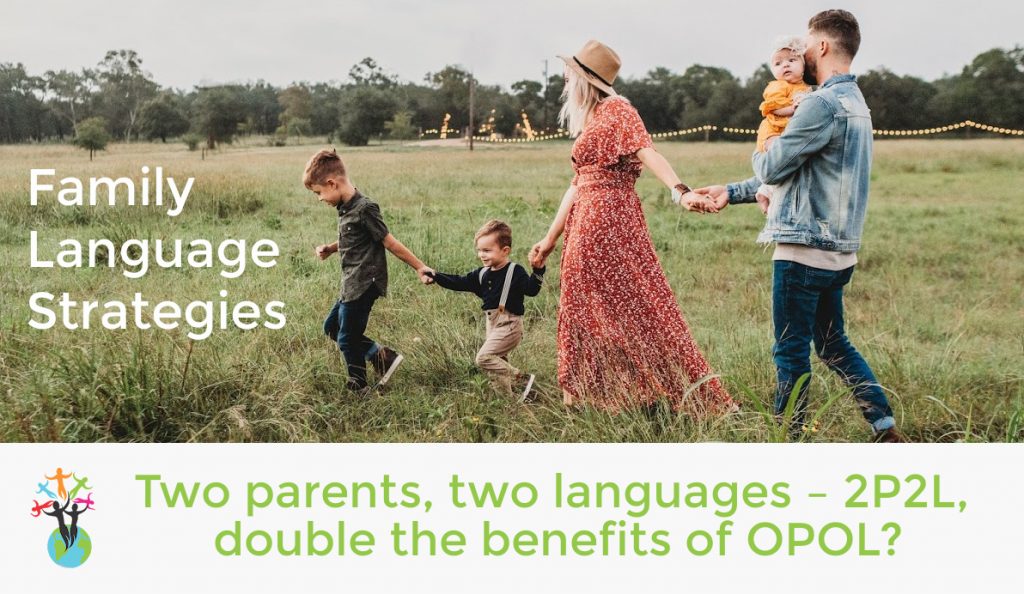 In my series on different strategies for raising a bilingual child, I will today introduce an approach, which you may not have heard about: two parents, two languages (2P2L). Previously in this series, I have written about one parent/person, one language (OPOL), minority language at home (mL@H) and time and place (T&P).

With the 2P2L strategy, parents are bilingual themselves and use both languages in their interactions with the children. The language choice depends on many different factors: school matters can be discussed in the language used at school, films and books in the language they are presented in, and hobbies and sports in the language they are conducted in. The choice of language can also depend on who else takes part in the discussion and whether the family wants others to understand (or not understand!) their interactions. Both languages are used roughly the same amount of time. Being bilingual and switching from one language to another is the norm of the family, and the parents are the role models for this behaviour.

The inspiration to bring in this strategy came from Professor Annick de Houwer’s research into multilingual families, which you can read about in her book “Bilingual First Language Acquisition”. One of her findings was that in families with bilingual parents who spoke both of their languages with the children, a slightly higher proportion of the children (79%) became bilingual, compared to OPOL families (74%). The difference is not massive, but it is there, and certainly warrants a closer look at the 2P2L approach.

Traditionally most studies about raising bilingual children have been conducted with families who say they follow the OPOL approach. Professor de Houwer however found that in her study of 1356 families actually only about 17% of them used the OPOL strategy! The 2P2L was used by 42%, and in 41% of the families, one parent used only one language, while the other used two.

What about consistency, can we forget about it?

So, if 2P2L, a strategy where both parents speak both family languages, is more effective than OPOL, can we stop discussing about consistency? In certain family language setups, the answer will probably be ‘yes’, but in others it is definitely still ‘no’.

What about confusing the child with many languages?

Using several languages in a family does not confuse a child! This is persistent myth that unfortunately still pops up in forums and less informed articles. Children can effectively distinguish between different languages at an early age and will not get “mixed up” by parents using more than one language. I would still try to keep to one language in one sentence, though, until children learn to use both languages separately.

Who should use 2P2L?

To use this strategy, both parents should be comfortable in speaking both of the family languages. The best outcome will be when both the languages are also spoken in the community, so that the child can easily be exposed to them from other sources. The child should also have access to other resources in both languages, including books, magazines, films, TV programs, cultural events and so on. Ideally, the child should also spend time with other children who speak the same languages. It is important that the child is motivated to actively use both languages and there are opportunities to do so.

To sum it all up – does “doubling” the languages used by parents double the benefits? No, it does not, but it may well make life easier for many bilingual parents who find the OPOL strategy difficult to follow and is in fact, at least statistically, the better option for them.

What are your thoughts about the different family language strategies? Were you aware that there are several different approaches that you can take when bringing up a bilingual child?