7 worries parents of bilingual children have

by Rita | Jul 30, 2014 | Being the parent in a multilingual family, Challenges, Family life, Practical advice | 6 comments 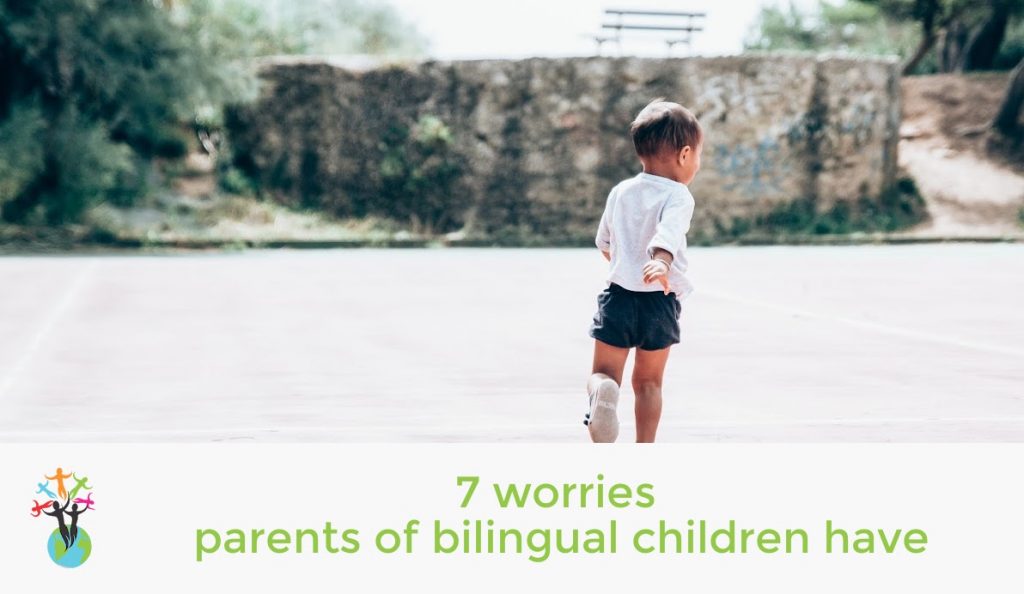 You have decided to bring up your children to become bilingual so they can reap all the benefits of knowing more than one language. Exciting! You speak to your family and friends about your decision and ask other parents about their experiences. Others may not be as excited as you are and their questions and comments might make you think that this may not be as easy as you thought. So what are the most common worries parents of bilingual children have and what to do to put your mind at rest?

1. Will my child’s speech be delayed?

One of the most common myths about bilingual children is that their speech development will be delayed. The fact is that bilingual children learn to speak in a different order than monolingual children and their vocabulary, taking into account both (or all) their languages, is comparable to that of children who only speak one language. Keep in mind and there can be significant differences between children independent of how many language they speak.

2. What if my child starts mixing languages?

It is normal that bilingual children initially mix their languages. Learning to speak is an incredibly complicated task and it will take some time before a child learns to know what word, phrase or grammatical structure belongs to which language. When they are older bilingual children will also mix their languages when they speak to other bilinguals. This is also a perfectly normal phenomenon which is called ‘code-switching’.

On the contrary – bilingual children have been found to, on average, do better than their monolingual peers. Switching between languages enhances the part of the brain which is also used when we focus on a task and when we have to weed out irrelevant information. Having a strong home language also supports the learning of additional languages.

4. What if I don’t know my language well enough?

You don’t have to know your language perfectly to be able to pass it on to your child. As long as you make sure your child also interacts with fully fluent speakers of the language, you don’t need to worry that your vocabulary may not be big enough or that you could pass on an accent. Children are much more perceptive than adults to the finer nuances of language and will pick up the right pronunciation from the native speakers. What will happen is that you will improve your own language skills alongside your child. Also be prepared to be corrected by your child – this will happen sooner than you think!

5. Other families have not reached their language goals, why should we?

Maybe you have parents among your friends or relatives who also set off to ensure that their children become bilingual but at some point gave up on the idea. They might even tell you that it is not going to work, that the children will decide what they are going to speak and that the minority language will lose out. The fact that you are thinking ahead makes you different from these families. Let me tell you that it is definitely possible – the millions of bilingual families across the world are proof of this. Remember that your success rate is significantly better if you plan ahead, and don’t forget that there is plenty of help and advice to be had (start by looking around this site!)

6. What if my child only learns to understand and not to speak?

Especially if you are the minority language parent and if there are few other language exposure opportunities, you might think that your child will not hear and interact enough in the language and so will not learn to speak it, but become a receptive bilingual. Maybe you have read that children should be exposed to a language for at least 30% of their waking time to pick it up. Maybe you have done a quick calculation and come to the conclusion that this will not be the case for your child. Note that 30% exposure is only a general recommendation and as such a good goal to have. However, the figure is not based on research, and from my own family I know that children can learn a language with less exposure. Do your best to make the exposure time as effective as possible, be consistent in your language use and find other resources to help with the language learning – it can be done!

7. What if my child stops speaking my language?

This is one of the biggest worries that parents have. The children learn the minority language and speak it as long as they stay mainly at home, but give up on it when the exposure to the majority language increases as they spend more time at nursery or school and with their friends. It is true that this is often a crucial point as to whether a child will continue to speak the language or not. However, being aware of this situation in advance, showing pride in the language and staying consistent in the use of it through-out will ensure that the minority language does stay as an active language in your child’s life.

What is (or has been) your biggest worry when it comes to raising a bilingual child?