Bilingual parents – what to do if you are told to drop a language?

by Rita | Jan 29, 2014 | Being the parent in a multilingual family, Challenges, Language development, Practical advice, Top 10 most read posts | 21 comments 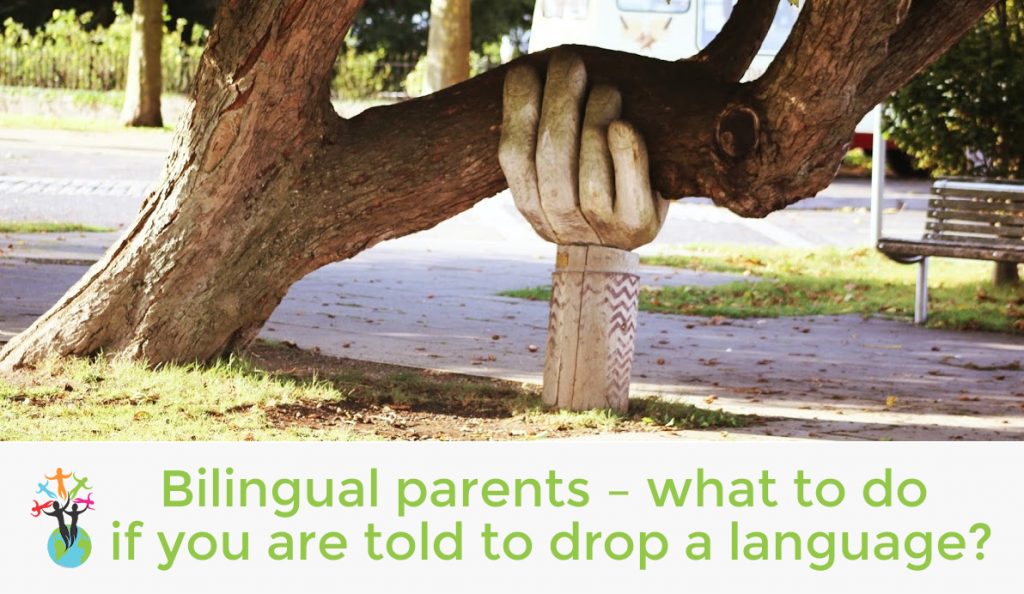 This is post I wish I wouldn’t have to write, and I had hoped advising parents to stick to only one language would be a thing of the past.
But it isn’t.
Only last week I was contacted by two worried parents from different parts of the world who had been told that their use of more than one language in the family is detrimental to their child’s language development and that they should change to using only one language – the majority one. Sigh.

Dropping a home language is not beneficial for learning the majority language.

Earlier research which indicated that bilingualism would be detrimental to a child’s language development is based on inappropriate testing methods for bilinguals, as explained in the article “Bilingualism – Consequences for Language, Cognition, Development, and the Brain”

“Bilinguals often are assessed in only one language, providing an inaccurate assessment of the child’s actual level of linguistic and cognitive development. A child assessed in only one language, typically that of the country in which he or she is being tested (i.e., English in the United States, often the second and less-proficient language), may be placed erroneously at a lower level of cognitive development than his or her true level.”

The way bilingual children learn a language is different from monolingual children and what may on the surface seem to be a delay in vocabulary learning is actually a different learning pattern. Bilingual children catch up soon enough, and they gain an array of benefits alongside another language (see last week’s post Bilingual is better – the advantages of speaking more than one language).

What about children with autism or other developmental issues? Should their parents stick to only one language? In her article ‘Is Bilingualism detrimental for Children With Autism?’ Dr Susanne Döpke states that

”There is no research evidence to suggest that hearing more than one language makes the symptoms of autism worse or that the English-only advice improves the abilities of children with autism – language-wise, conceptual or social.”

The Canadian charity The Hanen Centre which specialises in helping “young children develop the best possible language, social and literacy skills” recommends that parents should not give up on any of the family languages:

“It is widely accepted that parents should be encouraged to communicate with their children in their home language, and that professionals working with the child should support the family’s home language.”

Then we come to the crucial question – what to do if you are a parent in a family with more than one language and you are advised to drop one (or more) of your languages?

First of all ask yourself whether the person advising you has the necessary knowledge about bilingual children. The likelihood is that they don’t as they wouldn’t be telling you to drop a language if they did. Then think about the motivation behind the recommendation – how would it benefit the person if your child would only speak one language (normally the majority language)? I do sympathise with child minders and teachers, who have groups with many children whose first language is not the language of the education system, and I admire their engagement and commitment, but asking parents to drop a family language is not the right approach. A strong home language supports the acquisition of another language and parents should be given advice on other ways to help their children to improve their language skills. If you do feel concerned about your bilingual child’s language development, get in touch with a specialist who is familiar with bilingualism.